Get To Know: Them Vibes & See Them Tonight At The Basement

I had the pleasure of spending Monday night listening to, talking about good music, and drinking good bourbon with Alex Haddad and Larry Florman of Them Vibes. You may have heard their track “Lorelei“ on the 615 Local Spotlight on Lightning 100. The first time I caught these gentlemen live was at the On Tap Showcase at Tin Roof last week with One Arm Train and our own Lauren Strange. Them Vibes managed to squeeze a five piece band, an energetic frontman, plus a trio of female backup vocalists onto the stage, and almost blew the Tin Roof off the joint. They brought a tremendous amount of passion and energy to tracks from their debut album “Shine On.” Below are a couple pictures from that show courtesy of Shawn Jackson.

1. Them Vibes. Photo by Shawn Jackson.

2. Them Vibes. Photo by Shawn Jackson.

3. Them Vibes. Photo by Shawn Jackson.

So, on Monday, after a few of the aforementioned bourbons, I got to hear a stripped down duet version of a couple of those tracks live, and I’ve got to say I like them even more now. While this is the first release of the current incarnation of this group, Haddad and Florman are not new to the scene. Previously members of Her and King’s County, they have played with the likes of Kid Rock, Montgomery Gentry, Charlie Daniels, and Kellie Pickler. Through Them Vibes and “Shine On”, Alex and Larry have written and played the raw, honest songs they were meant to bring to life. Their sound carries influences ranging from the gritty rock of The Rolling Stones and Led Zeppelin, the rhythmic sway of The Black Crowes and Tom Petty, and the intimate harmonies of Simon & Garfunkel and The Band. Why don’t you just listen to this for yourself:

I heard them play twice in just six days, and I’m about to make it three of the last eight because they have a show tonight at The Basement at 9PM with Goodbye June. Tickets will cost you a mere $5 at the door.

If you’ve already made plans for tonight, or just don’t like listening to music with your pants on (not sure what Grimey’s dress code policy is these days) you’re in luck, because Them Vibes will also be playing a living room session online concert this Thursday Aug 29th at 7PM. Tickets are dirt cheap – pay what you want! Available here. 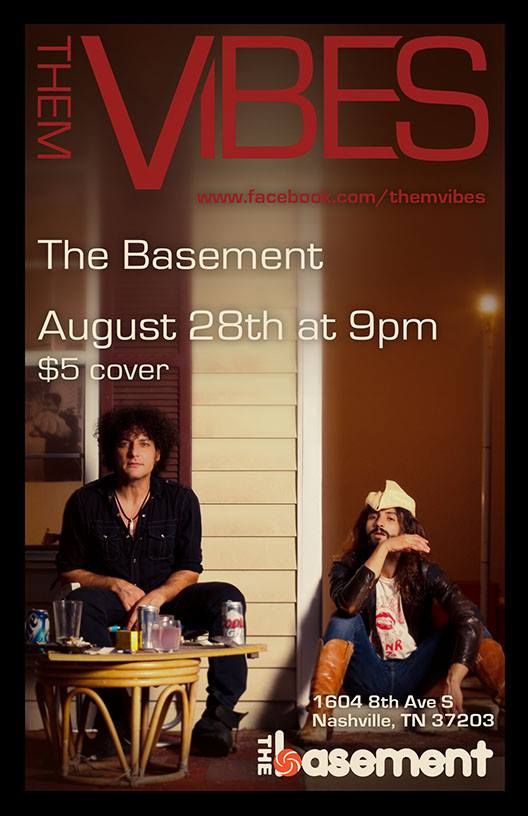 Hope to see everyone at The Basement. You’ll definitely be hearing more about these guys and the wonderful work they are doing.