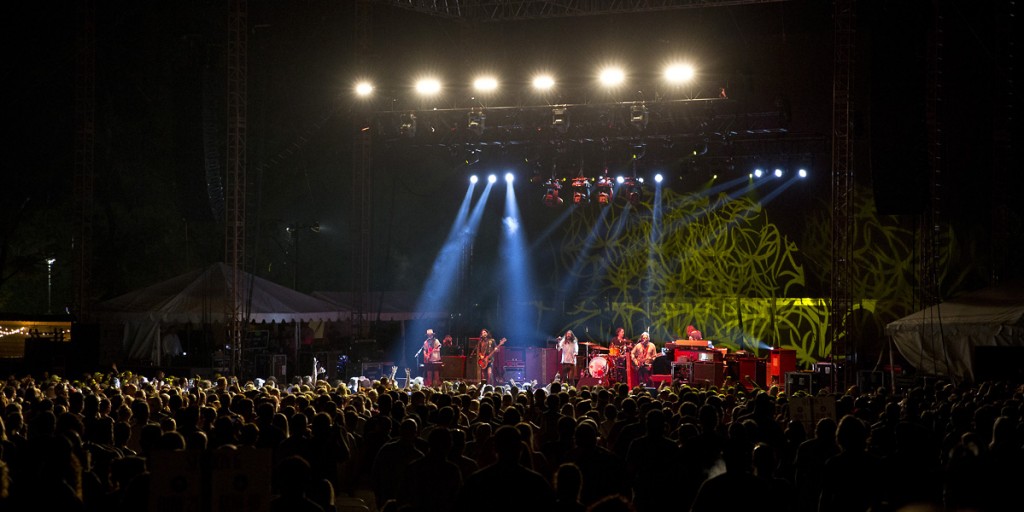 I missed the London Souls because I was eating lunch. Why in the hell do you start a show this early? Seriously, there is no way I could have gotten there that early. The shows we normally cover start at 9, but that means they start at 9:30, if you are lucky. Now, I’m stuck in traffic trying to get out to Fontanel for a 5:30 start time. Before I managed to put a beer down in the parking lot, Tedeschi Trucks Band started. So… Here we go.

Could I ever have imagined such a lovely pairing for a couple? I first saw Susan Tedeschi years ago in San Francisco. Derek Trucks was recently departed from The Allman Brothers, and was embracing his already established solo career. I wasn’t there when the first spark struck between these two, but, understanding their roots, it is absolutely no surprise. A perfect compliment to one another, and they have grown musically since. The last time I saw them, it was a raw musical blues experience. This second time, many years later, was a polished powerful experience full of horns and other accoutrement. The Tull-like flute solo had the crowd at full rapture… Well, as much as could be expected from a seated crowd of mid 40 something’s in a 90 degree Tennessee field. Side note: this place is beautiful

The Black Crowes of my childhood memory were essentially that of talented songbird/movie star dater Chris Robinson owning the stage. The last time I saw a true Black Crowes show was August of 2005 when they were filming their live set at The Fillmore. Insane. Since then, they have added the absolute slayer Jackie Greene on guitar, and, while their jam-bandy live performance is now stronger than ever. Chris, and his ridiculously catchy songwriting from the 90’s, were lost more to some stellar guitar riffing from the afore mentioned Greene and his uber talented brother, Rich.

I know this may sound a bit negative, but my take away from this show… The Black Crowes have adapted to their fans. They bring them guitar driven insanity followed up with some stellar stick work from local sportsman Gorman. It’s a party people. Don’t come expecting to hear “She Talks To Angels” like you heard it on their groundbreaking, 1990 album Shake Your Money Maker. Instead come ready to move your ass to some southern jam sounds that should make the current title holder, Widespread Panic, tremble… Or at least book them for their next tour. This is not for the faint of heart radio fan, because these guys are about to rock your world, or what ever it was that joint just told me.

-written with a warm miller high life in a sweaty Tennessee field.

Check below to see some of the great shots our photo contributor, Shawn Jackson, snapped at the show!