It’s just two days ’til America’s birthday, and we’ve got a special treat for you: a chance to win a pair of tickets to see Matt Pond w/ Matrimony & Radar vs. Wolf at The High Watt this Saturday night!! Find out more about the bands and how to win after the jump below! 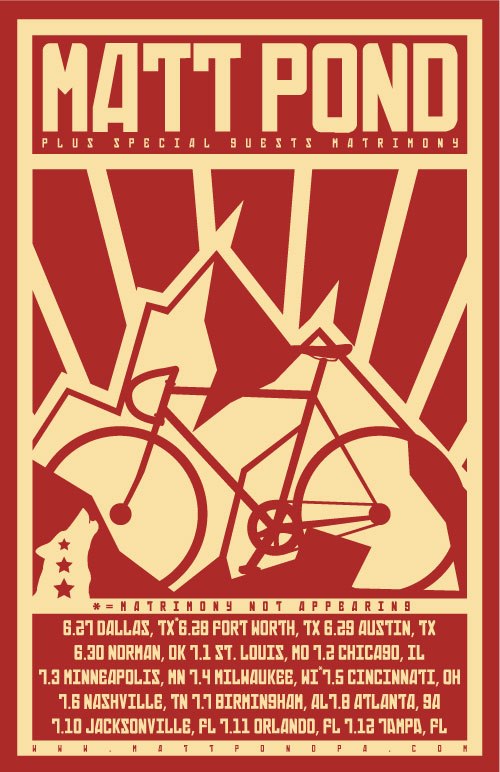 You can enter to win tickets by following these simple instructions, or, if you aren’t the gambling type, you can buy your tickets right here for just $12 each.

To win a pair of tickets to Saturday’s show at The High Watt:

That’s it! You and your guest must be 18+ to attend. We’ll announce the winners this Friday at noon.

Singer-songwriter Matt Pond dropped the “PA” from his stagename a couple of years ago and, with it, debuted a more focused, energetic sound. Matt Pond PA was, more or less, a band- but a band revolving around Pond himself. His latest album, The Lives Inside the Lines in Your Hands, marks the performer’s first solo release, and showcases everything Pond has to offer when he no longer adheres to the calm, indie pop blueprint he spent years so meticulously crafting.

We told you a bit about NC’s Matrimony when they were announced to make their Bonnaroo Club Stage debut earlier this year. As the name would imply, the group was formed through a marriage. Folky Irish singer Jimmy Brown married indie singer-songwriter Ashlee Hardee, whose brothers later joined the group, and, through matrimony, Matrimony was born.

Based in Nashville by way of California, indie rockers Radar Vs. Wolf recently released their debut album. With an eclectic range of influences, a knack for crafting poppy hooks, and unbeatable level of energy, we can’t  think of a better choice to kick off this exciting lineup!