Tonight’s gonna be full of glitter, butt shakin, and raunchy rotating. I’m in. Are you?

A few months ago, I was hangin’ out at the Stone Fox having a beer and watching a couple of local bands. It was shortly after the first group ended their set when I noticed the Mason jar (TN beer pint glass) in my hand was feeling kinda light. I contemplated whether it was time for a refill or if I should just tab out and surrender to my exhausted bones. It was a very slow evening. You know–when you feel like sinking your face to the bar, letting your arms stretch forward, nose melting into the grain of the wood? The energy felt dead considering it was mid-week. People were fishing for pens to sign their bills. I was eager to join them.

Of course when a low rumbling sound filled the air, I swung my head around to witness an interesting feng shui situation unfolding. I couldn’t believe what I saw. There (stage left) was a very unusual instrument: one without plugs, wires, or knobs. The kind of instrument you hear Grandpa defend in his Back-In-My-Day-You-Don’t-Know-Shit -About-Shit-Hippie- ‘Cause-Your-Eye-Podthing-Is-Full-Of-Brain-Rotting-Noise-Glued -To-Your-Ears speeches. Yes, a beautiful upright piano was parked with the keys left in the ignition. EXCUSE ME. An upright PIANNA! HEE! It was waiting for someone to smash and trash it.

Suddenly, this golden-cockerel of a guy with a satin yellow jacket stood up to the mic and began to aggressively crow all sorts of hilarious things. If you were asleep on the toilet, you’d have clucked and laid an egg. Buck-ahhhh.

Adam Weiner and Dan Finnemore form Low Cut Connie, a boogie-woogie rock and roll duo from Philly who are stopping in Nashville tonight. I’m gonna join the chorus with the other reviewers in the USA—Weiner IS the protégé of Jerry Lee Lewis. Ridiculously so. There was smearing of the keyboard. Slutty-fun glissandos. Additionally, I found his flamboyant performance style reminiscent of Little Richard. Cue: WOOOOOOO!!!!

LCC definitely have that stripped down, raw musicality. It’s like blastin off with that rockabilly music–your violent twist dancing will get so intense with them it’ll start unsnapping your bras and your clip on earrings will fly off. These guys will smack some knees red. Sometimes LCC’s sassy attitude makes you want to grin and shove them at the same time. They are such flirts. They have a bright stage presence that beams with the influence of artists from Sun Records. The audience was soaking it in that chilly spring night.

Weiner strutted around the stage and belted fabulous lyrics. He bullied the keys into submission while using the bench and the rest of the instrument as his personal dance floor. LCC’s choice of lugging around an upright piano all over the country should prove to you how dedicated they are to making good ol’ fashion rock and roll. The concert was outrageous.

I have a lot of respect for Weiner because he refuses to hold back when expressing his passion for performing. Some people might consider his behavior as egotistical and maniacal, but this is authentic artistry and entertainment, folks. He doesn’t limit this fiery energy to the stage, he desires to involve the whole audience in the experience. Connection is very important to this group. The caffeinated piano rhythms and exuberant guitar riffs are what hypnotize you into joining in. Their music has soul, and Thank God, because anything without a pulse is lifeless. 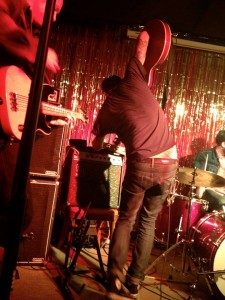 Watching him noodle his arms while running inside the audience at the close of the concert, I made a point to shake his hand before I left. Ha. This band was SOAKED in sweat. The gold jacket Weiner was wearing had turned a copper-shade and it resembled a heavy washrag. It peeled off with a suction sound as he tugged it from his back before greeting me. What a fun group of people!

Tonight will be the last of their concerts during their JUNE tour. LCC’s most recent album, Call Me Sylvia (2012) is a riot.  CHECK THEM OUT ON FACEBOOK HERE.

Listen to them sang it. [youtube_sc url=”http://www.youtube.com/watch?v=rBAAm7DQMWY”]

Special Thanks to Jon Vaughn of THOUSAND POUNDS OF NASHVILLE HAIR for the photos.