Sometimes you miss one show that you are really excited to see, and you stumble upon something that you really needed to see.  That is exactly what happened on Tuesday night at Mercy Lounge.  Specifically, Dick Dale, the king of surf rock, happened. 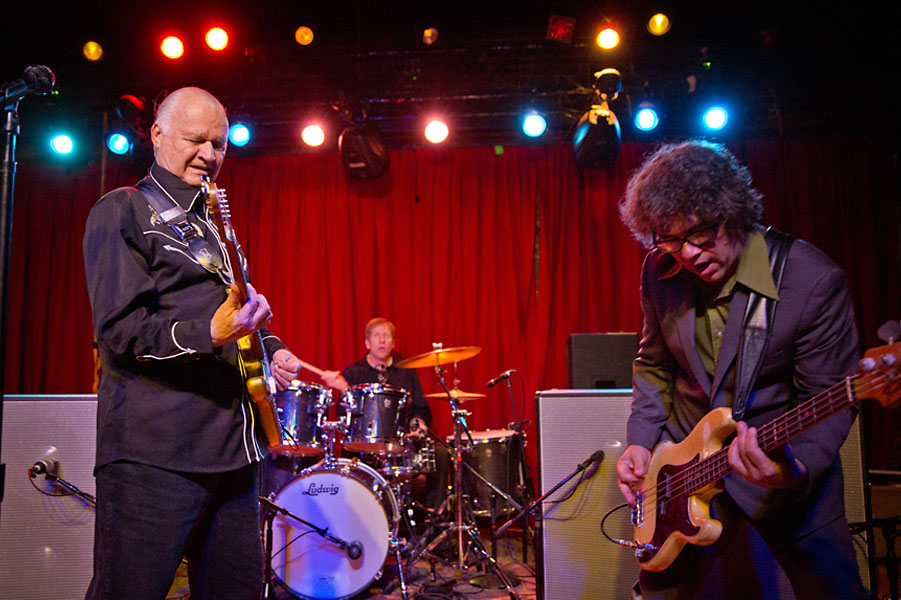 Everyone over the age of actually-reading-this knows the song “Misirlou”, though I would dare say that few would know it as anything other than the Pulp Fiction song. Dick Dale immortalized himself for another generation or three with that song, but there is so much more to his genius.

You can check out our review, and some great shots from photographer Shawn Jackson after the jump.

I arrived at the traditional Nashville show start time of 9pm to check out the surf sounds in the debut Nashville performance by *repeat repeat. However, when I saw sweaty front man Jared Corder, I hoped he had just run from East Nashville to the venue, but I knew that I had just missed their opening set. While kicking myself about my miscue, I wandered across to check out a set by one of our favorites Anna Haas performing for The Billy Block Show next door. Within minutes, I was feeling better about myself after seeing her sensual, theatric pop display.

As I walked back up the steps to Mercy, I knew I was in for a treat, but I had no idea how amazing this display would be. Let me paint a picture for you. There were no special effects on the stage. There was nothing to hide the fact that a half full Mercy Lounge crowd of mixed ages was watching a 75 year old man with a beat up Strat in his hand. Backed only by a bass and drums, that room was caught in a rip tide of powerfully loud riffs. A lot of the songs sound similar in their numbingly simple, fast paced reverb that we all associate with surf rock. The difference was the live experience. The difference was watching a 75 year old man progressing through chords with that signature upside down string set up. It’s trippy to watch the tapping of harmonics on what should be the low E, but he moves with that guitar like it is a part of his body.

In a turn of events that brought a call for folks on the deck smoking to return to the venue, Dick Dale joined the phenomenal drummer Dusty Watson (Agent Orange) on the skins for an amazing experience. That was only a precursor to Dale keeping the sticks in hand to drum on the strings of bassist Sam Bolle instrument while Bolle fingered the notes above his head. This was a moment that was too awe-inspiring to photograph, so, if you can’t understand that description, find me anytime for the rest of my life for a full description and attempted demonstration.

At one point I had a discussion with the bartender at Mercy about the experience of watching living legends that are seemingly well beyond their prime in so many arenas. We discussed similar experiences with Willie Nelson and Sonny Rollins, if that can give you some indication of company we placed Dick Dale. It is truly amazing to see someone that has health problems galore completely own a crowd and dominate a musical instrument. In the hopefully distant future, when Dick Dale finally does pass, I kind of hope it is on stage with his guitar in his hand. Because, if it happens that way, I know that he would leave this earth with a sincerely joyous smile on his face.

Check out the photos, and a live performance of “Misirlou” below.

Hear the new single "Secret Game" from The Kingston Springs!