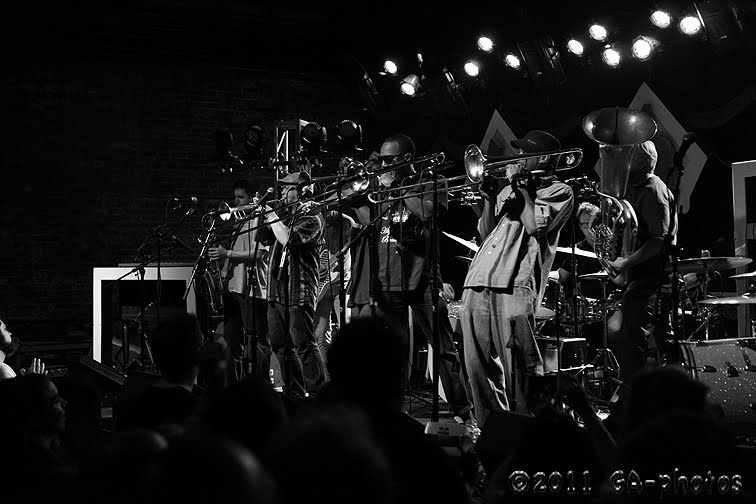 Be still, my beating heart! Are those my boys? Are those the guys that I funked out to while drinking Abita during my college years? Is that the crew that I took the coeds to see hoping they would understand the metaphor of a name?

Yep, that’s them, and I am glad they lasted longer than a few of those college relationships. These guys started bringing the funk in New Orleans in 1994 under their original moniker Galactic Prophylactic, and it’s just as exciting now as it was when I was young enough to stay up until 4am and make it to an 8am class.

We are giving away a pair of tickets to this one, and we’re gonna give you a bunch of reasons why this is one show that you really need to see right after the jump.

The band originally began as an octet formed by Chris Lane [vocals] and Rob Gowen [guitar], but was soon pared down to a sextet including Jeff Raines [guitar], Robert Mercurio [bass], Rich Vogel [hammond], and the insanely good drummer and practical New Orleans legend Stanton Moore. Scroll forward to about 1:45 in this video to see just how amazingly creative Stanton is. Their original sound was a very traditional New Orleans sound, but there has been a maturation over the years. While you will still certainly hear the music that so prominently spews from the doors and windows of most every establishment outside of the tourist trap karaoke spots, you will also hear a much more established sound of their own. Today there is a lot more electronica and some hip hop fused into that trad sound. I don’t care if you smoke out your Honda before you head in, because it isn’t going to matter to your enjoyment of this show. It will absolutely blow your mind.

I’m so certain of this, I’m going to give one of you a pair of tickets for this show. All you have to do is:

You and your guest must be 18+, per the show’s age requirements. We will pick a winner on Tuesday (4/16) at noon. If you aren’t feeling lucky, you can just go ahead and grab your tickets here.

Don’t simply watch this video, and think you will understand how awesome this show will be. It’s a live thing people. In the words of George Clinton, “free your mind and your ass will follow.”

Things get started at 9pm, and you’ll also get to check out the Nigel Hall Band, who is often described as the “Curtis Mayfield of today & D’Angelo of yesterday”. Get out to see some live music.

Battle of the Pop Stars