Bonnaroo Band of the Day: The Sheepdogs

To say The Sheepdogs have had an amazing past couple of years would be putting it mildly. In 2011, the band became the first unsigned group in history to grace the cover of Rolling Stone, after beating numerous other acts in a “Choose the Cover” competition. That same year, The Sheepdogs made their first national television appearance, along with their inaugural performance at Bonnaroo. In the couple of years since, the band has signed to Atlantic records and released their self-titled major label debut, with production duty from Patrick Carney of The Black Keys. To make matters even more impressive, the quartet hails from Saskatoon, Saskatchewan, Canada- not exactly the first city to come to mind when you picture revivalist bluesy southern-tinged rock and roll. But they don’t only embrace old rock and roll; they embody it. The band gives their retro rock sound a reason to exist in a modern context, crafting amazing, instantly familiar yet competently fresh tunes dripping in harmonies, grooves, and melodies worthy of the legendary acts they’re so heavily influenced by. Their sound would be nothing without an equally impressive and rock and roll-worthy live show, however, and The Sheepdogs solidly deliver on that front as well. 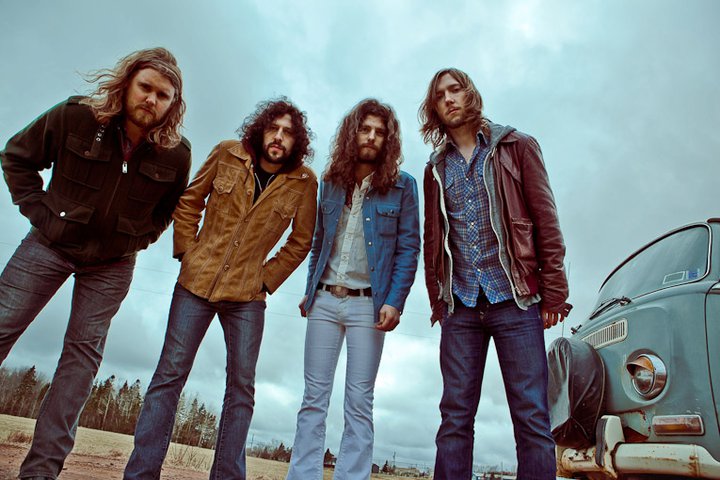 On their latest album, The Sheepdogs, the group obviously borrowed some aesthetic cues from producer Patrick Carney. Though they’ve always been bluesy, groove-oriented, and had an affinity for classic organ tones, the album strays into very familiar territory treaded in recent Black Keys releases. That’s not to say it sounds disingenuous- it works quite well for the band. If anything, it’s a testament to the range and adaptability of The Sheepdogs’ songwriting chops. Though they seemingly came out of nowhere, the band has four great albums under their (vintage leather) belts already, and just enough experience to really deliver on the level their newfound hype commands. The first time they played Bonnaroo, they were the new guys who lucked into quick recognition. Now, they’re a proven rock and roll force to be reckoned with, and a band you’ve got to see!