A couple weeks back, we mentioned that local independent radio station Lightning 100 had teamed up with Jackalope Brewing and some other great sponsors to host the 5th Annual Music City Mayhem. Music City Mayhem is a fan-driven competition between 32 local artists for a chance to win a month of heavy radio play on Lightning 100, 3 days of studio time with an engineer at Welcome To 1979, and a slot to play at a Live On The Green show this summer! Past winners have included Moon Taxi, Hightide Blues, Eastern Block, and Roots of Rebellion.

Out of over 300 submissions, Lightning 100 has selected the final 32 artists who will now be voted on by fans over the next month, elimination bracket style, until 4 artists remain. The final 4 will then compete in a showdown on April 13 at The East-Centric Pavilion, where the winner will be chosen! Voting kicked off yesterday, and Jessica French beat out The Future in round 1. Today’s matchup is between Matt Moody and Korby Linker. Voting will began each day at 9AM, and you can find the full schedule and match-ups, as well as cast your vote, right here.

Here’s the bracket of competing artists and their respective round 1 match-ups. Head here for the voting schedule, and don’t forget to support your favorites! 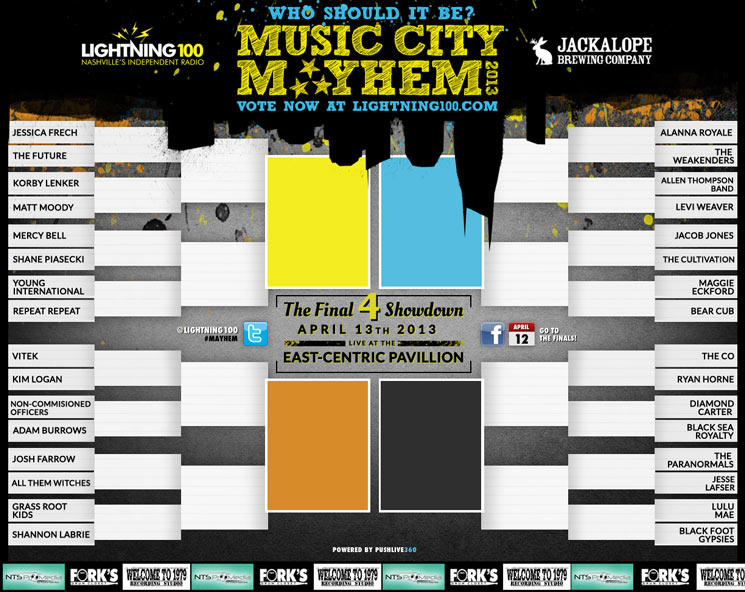 In case you’re not familiar with all of the bands, Lightning 100 has also put together this fantastic Music City Mayhem Playlist! Even if you’re not planning on participating, it’s worth checking out for the great local tunes!