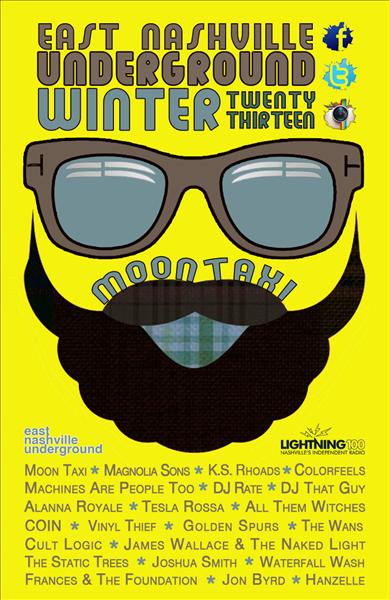 The Winter 2013 East Nashville Underground festivities kicked off last night with an awesome 8 Off 8 show @ The High Watt featuring ENU alums (check out Andrew’s preview here). We’ll be bringing you preview coverage all week, so check out today’s installment which will prep you to party on Friday night, plus a little history lesson recap below!

You can get your wristbands, merch, and more in advance on a little jump. Friend ENU on Facebook here for last minute updates, Tweet at ‘em all weekend, and share your experience on Instagram.

And without further ado, here’s a run down of bands you can check out at the East Room this Friday night (2.15) – Things get going around 9pm and the party doesn’t stop until nearly 3am. Rest now!

Machines Are People Too

The current space hosting ENU, The East Room, is located at 2412 Gallatin Road, which is owned by Ben Jones of Pizza Buds and The Grass Knoll Movie Nights in 5 Points. He is an all around gentleman who is doing great things to enhance the East Nashville Community. Jared and Kristyn plan to keep E.N.U. here until they outgrow the space. Then their aims will be set on an outdoor scenario along the lines of Starry Nights.

Between the amazing lineup, the awesome sponsors, the forthcoming documentary “East Side of the River” featuring ENU, and the overall buzz of things as we head into 2013, it’s obvious that ENU is quickly becoming a taste-making enterprise poised to totally take things to the next level!