Brit rockers Bloc Party are set to perform in Nashville this Friday, January 18, at The Cannery Ballroom. I believe this marks the band’s first stop in town since 2007. Released late last summer, the band’s latest album, Four, found the post-punks’ triumphant return to form after a three year hiatus. Four takes the band’s signature danceable, Britpop-influenced indie rock and pushes it to even more energetic and inspired new bounds. Though their new album didn’t carry quite the hype of their career-defining debut, Silent Alarm, it is easily the bands’ strongest effort since, and matches their debut in terms of artistry. A lot has changed over the last decade in the post-punk movement that Bloc Party helped usher, but Four proves their ability to still sound fresh and relevant (and rediscovers much of the spark that diminished with their last couple of albums). The band is known for their high-energy, engaging live performances and their tour schedule has slowed down dramatically in recent years, so don’t miss your chance to catch what’s sure to be a fantastic show this weekend!

Check out the video for “Octopus” from the Bloc Party’s latest album ‘Four:’

Providing support, buzz-fueled up and comers Io Echo will be bringing their dreamy, shoegazey, layered artpop to Nashville for the first time. The band have only released one EP (they have a full-length in the works), but have some impressive film collaborations under their belt already, along with tons of media buzz and a reputation for fun and interesting performances. The band is the brainchild of Leopold Ross, brother of Oscar winning film composer and How to Destroy Angels member Atticus Ross.

Check out the video for Io Echo’s “When the Lilies Die,” below:

Bloc Party and Io Echo are performing this Friday, January 18, at The Cannery Ballroom. The show starts at 8:30PM (doors at 7:30), it’s 18+, and tickets are still available here. For more information, click on the flyer below. 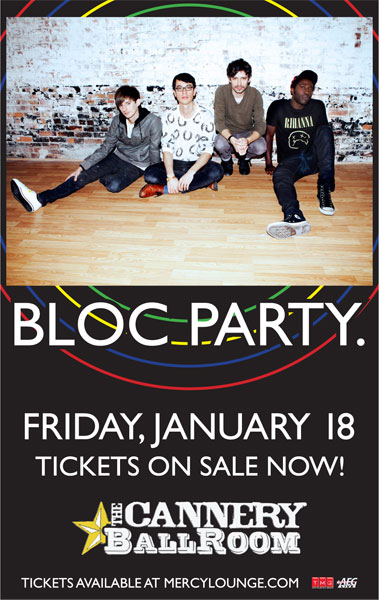