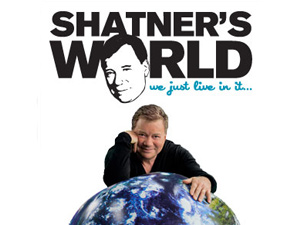 Captain Kirk is coming to town with Shatner’s World, his one-man live show, straight from The Great White Way– and it’s for more than just the casual Trekkie (if there is such a thing). The Shat’s show promises “with signature storytelling, video clips, and an inimitable musical style, William Shatner brings to stage the one man by whom we are all compared, himself.” The question is: can Shatner upstage himself and/or the kidney stone he auctioned off for charity?

If my tricorder is correct, Shatner hasn’t made a live appearance locally since he attended the 2009 Nashville Film Festival screening of the documentary film, William Shatner’s Gonzo Ballet, which chronicled the making of his album, Has Been (produced by Ben Folds), into a ballet titled, Common People. But then again, we have had a few local Trek conventions since, and he loves to be loved on by the fanboys… so right my wrong if you snagged a selfie with J. Tiberius (or photo-bombed someone who did) in the last few years in the comments and share that photo with us!

Here’s the deal: In addition to being the icon we all know as the captain of the Starship Enterprise, Shatner’s also a 30-time best-selling author (who’s reading these books?), an accomplished documentarian (though they are, mostly films kinda’ about himself), plus the man created DENNY CRANE (who didn’t give a shit before the honey badger made it cool!). Oh and, he’s a dedicated breeder of American Quarter horses and plays paintball for charity… so you know he’s sensitive and stuff.

Full disclosure: I’m more of a Star Wars girl than a Trekker (and maybe more a fan of Leonard Nemoy’s music), but… I can’t pass this opportunity up. I’ll be there… hoping that this happens…

Or you know… he can just read the phone book and it will be oddly compelling and unsettling and all-around awesome. Incidentally, he also dropped another record of covers back in 2011, which you can check out below.

If you weren’t lucky enough to snag the pricey VIP treatment that included a meet-n-greet(!!!) before that tier sold out, you can still see the show while available. Remaining tickets run $25-$75, show starts at 8pm and it’s in TPAC’s Jackson Hall. You can get ’em in advance on the jump.