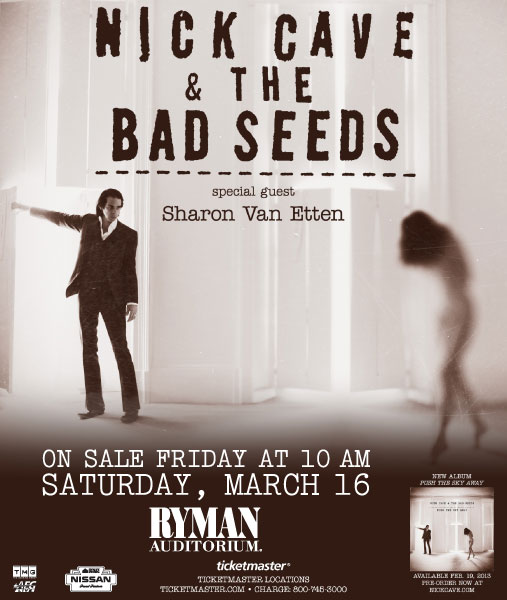 The rumors are true – Nick Cave & The Bad Seeds w/ Sharon Van Etten at the Ryman on Saturday, March 16 has been announced! And we’re here with another win ’em before you can buy ’em contest from our friends at AEG Live/TMG.

Nick Cave and Co. have a new record, Push The Sky Away, planned for February 18, 2013 release, and we’re excited to see him in Music City on tour in support of that effort.

And with Sharon Van Etten on the bill, this makes the show a serious DON’T MISS.

Here’s the trailer for the new album:

And here’s how you make your bid for free tickets to see it live:

Congrats to our winner, Dillon Gonzales!

And now, from the vault of Things-Former-Goth-Kids-Like-Me-Can’t-Ignore, we offer this Nick Cave video featuring Kylie Minogue, “Where The Wild Roses Grow.” Warning: totally nightmare inducing.

And because she is made of pure awesome, we leave you with Sharon Van Etten’s video for “Magic Chords.”  [Incidentally, Ms. Van Etten’s cover of Irving Berlin’s “What’ll I Do” was featured in the season finale of Boardwalk Empire  last night – and if you ask nicely, maybe I’ll share my HBO-Go log-in so you can sneak a peak.]