King Tuff is becoming some sort of Nashville institution.  I guess it must have all started when King Tuff’s Kyle Thomas was playing at Springwater last summer with Hunx and His Punx (which apparently we were too lazy to write about).  Then we had the Stone Fox opener that didn’t happen, and ended up over at The VFW, but had that kick ass show poster (below).  Alas, Tuff pulled a Radiohead right before that set, and rolled into Third Man to drop a set on some acetate.  If you missed all of those shows, you get your chance at redemption tonight as King Tuff joins forces with Gap Dream and Fletcher C. Johnson to make that night at The Stone Fox a reality.

If you don’t know Kyle Thomas, you should read this hysterical briefing that the, oddly playful that day, Pitchfork gave about him:

His charisma is magnetic, his shows are akin to cheap-beer-soaked tent revivals, he combines the stadium-sized guitar licks of Erik Cartwright with the bratty whine of Eric Cartman, and his solo debut, 2008’s Was Dead, was the sort of album most scuzz-loving musicians would incinerate their garages to make.

If that doesn’t give you enough to understand what you are going to see tonight, then you should check out his most self titled release on Subpop below.  And note that album cover which the same playful Pitchfork review said “looks exactly like the kind of decal someone would slap on the bumper of their beaten-to-shit 1976 Camaro, and for the most part, the music sounds perfect for playing inside such a vehicle while attempting to see if it can still hit 80mph.”  Even though I have no idea how to decipher Pitchfork’s ever ambiguous scoring system, those are two pretty hysterically accurate description of all that is King Tuff.

Don’t roll in too late, because I would hate for you to miss the garage glam of Cleveland’s Gap Dream and Brooklyn’s Fletcher C. Johnson’s scuzz-pop.  You can have a listen to each below…  [update: I can’t stop listening to Gap Dream] [updated again: tickets are only $5 with proof that you voted today] 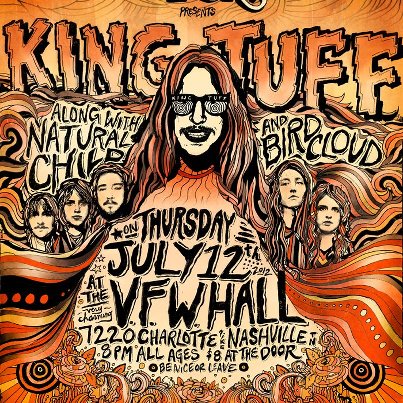