Do you know about Kansas Bible Company?  They’ve been playing around the Nashville scene since moving to the east side of the river in the summer of 2011.  Maybe you caught them at Green Door Gourmet, The 5 Spot, Drifters, The Basement, or Mercy Lounge?  One local venue employee (who’s seen thousands of shows) even told me that their recent KBC experience was at the top of their all-time favorites list… I would say that’s quite a compliment.  Talk about a band on the rise… these guys are like a rocket. 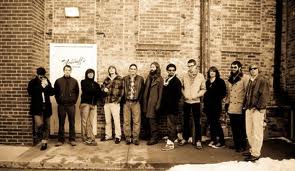 For those of you that don’t know about this band, it’s a band of buddies (11 of them) that met at school in Indiana, and they started playing a very unique brand of rock n’ roll infused with funk and soul.  A giant leap of faith (and, surely, some sad parents) later, and they are Nashville’s newest buzz band.  It’s a very fun and full sound replete with horns, guitars, and percussion.  That description just doesn’t do the band justice though.  I’ve attached some selected songs from their debut LP, Ad Astra Per Aspera, in the (flash required) SoundCloud player below.  I’ve also attached some tracks from their Surf Rock Trilogy EP in a Bandcamp player that everyone should be able to see.  I’ve provided a link to their SoundCloud page where you can download everything that you have heard here for free.  I’m obviously drinking the Kool-Aid here because I can’t resist putting up the video for “How To Build A Planet” as well.

You’ll have some other chances to see them later this spring in Nashville, but I doubt this band is going to be playing little local gigs for too much longer.  So, why don’t you get out tonight, and make this happen.  Things get started tonight at Exit/In around 9pm with The Coolin’ System and May Hwen.  Tickets are $10, and you can grab them here.

Real Estate announces more tour dates. No Nashville date... or is there?