Jack White’s solo debut record due out on April 24th

While we may not be getting any new White Stripes material ever again, we can at least revel in the upcoming solo debut, titled Blunderbuss, from Jack White.  Doesn’t debut just sound weird next to Jack White’s name?  He has such an impressive catalog behind him that it’s strange to think this is the first solo effort that he has released.  Jack addressed that in his press release for the new record saying,

“I’ve put off making records under my own name for a long time but these songs feel like they could only be presented under my name. These songs were written from scratch, had nothing to do with anyone or anything else but my own expression, my own colors on my own canvas.”

He’s leaked the first single, “Love Interruption” from that record over at his website.  Blunderbuss will be released on April 24th on his own Third Man Records label.  A promo 7″ will be released on February 7th with “Love Interruption” and a non-LP track “Machine Gun Silhouette” on the B-side.  You can pre-order that 7″ here for $6.  The back cover art for the 7″ is below.

There’s some bated breath around here until this one is released. 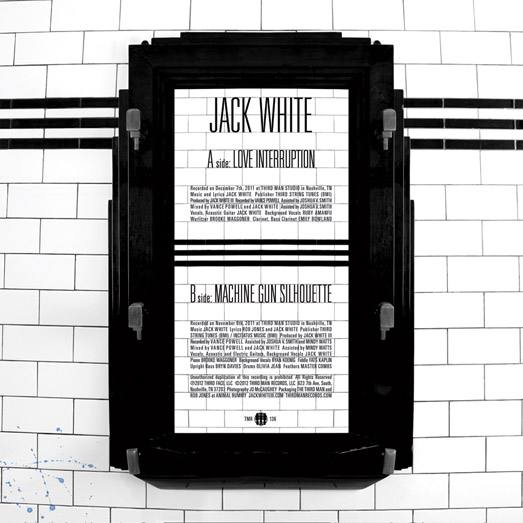