Tonight is one of the most anticipated New Faces Nites in recent memory as it will include a set by The Sheepdogs.  We told you a little bit about The Sheepdogs with the October 2011 release, Learn & Burn.  It’s a revamped 70’s rock sound that harkens back to the days of easier listening.  It’ll make you want to wrap a bandana around your forehead, and wonder if Vietnam is still going on.  We weren’t the only ones that caught on to The Sheepdogs.  Rolling Stone recently ran a contest allowing readers to “Choose The Cover” for the epic magazine… and, after 1.5 million votes, The Sheepdogs became the first unsigned band ever to grace the cover.  Oddly enough, if you listened to The Sheepdogs blind, you might start thumbing back through your parents old Rolling Stone magazines to see how you had never heard of this band of the past. 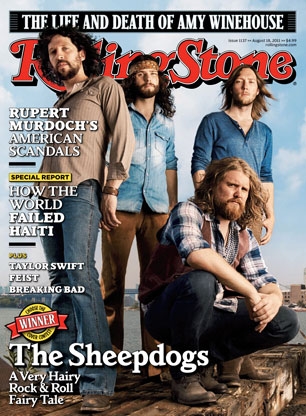 Regardless, they are buzz-worthy, and you can check them out for FREE tonight at The Basement.  If you miss them tonight, I’m pretty sure you will get another opportunity to see them, but I doubt it will be in the intimate (and did I say FREE) confines of The Basement.  So, tune up the VW Westfalia and roll over to The Basement tonight.  The Sheepdogs should be on around 10:15 pm, but you might as well make a night of it.  Doors open at 8pm tonight, and the other up and comings bands on the docket for tonight include Electric Hearts, Paranormals, Megan Jean and KFB, Julian Jones, John Fullbright, & Rebecca Roubion.

You can check out more of The Sheepdogs record at their, sigh, MySpace page, and you can watch the video for “I Don’t Know” below.

Tuesday Night In Nashville with The Sheepdogs, Madi Diaz, The Electric Hearts, and more...