Get To Know: Battle Avenue

Music is very cyclical, and you constantly find artists recycling sounds into modern versions of older ideas.  That is exactly what I thought of when I first heard Battle Avenue.  It’s a growling rock and roll that grabs bits and pieces of the 90’s grunge sound with an updated sound that is full of soaring guitars and sore-throated vocals.  It really reminds me of an Americanized WU LYF. 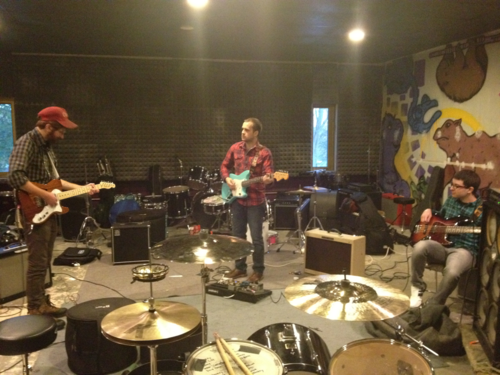 The current line up is Jesse Alexander (guitar/vocals), Samantha Niss (drums/percussion), Max Schwartz (bass), and Adam Stoutenburgh (guitars and all the other instruments), but the band was originally created by Jesse and Samantha to play a single show to open for Thao Nguyen in New York.  After that single show, the creative process of these kids grew, and so did their music.  I asked Jesse how they created their sound and their band, and here is what he had to say.

We practiced for a bit in a giant garage on the property of my childhood home, a huge long concrete building falling apart and filled to the brim with junk. It had been used by a furniture renovator turned manic psychotic criminal, and when they institutionalized him we were left with a warehouse filled with old chairs and rotting wood. I always thought it was an appropriate place for such chaotic, manic, jumbled, nostalgic songs to be fleshed out in. As for recording… we recorded our first demo on a broken tape machine, by ourselves, knowing barely anything about the recording process, and it shows. I think that demo has a lot of charm, if not a lot of technical recording prowess.

They have obviously come a long way since the broken tape recorders with their debut LP War Paint which released in April 2011.  The record was recorded in their homeland of upstate New York at Marcata Studios, and it was produced, engineered, mixed, and mastered by Kevin McMahon (Swans, French Kicks, Titus Andronicus, Frightened Rabbit, The Walkmen).  The record has been on heavy rotation here since I first ran across it.

While en route to SXSW in March, they are looking for a spot to play in Nashville.  I’m hoping that works out for them because I’m pretty excited to check these guys out.  I’ll keep my ears to the ground about that one, but, in the meantime, get to know Battle Avenue.  You can listen to War Paint with the player below.  Let me know what you think!