Looks like we have a new series of Thursday parties that are starting tonight.  Ovvio Arte is setting up these weekly shindigs called Bleed The Ballroom to promote… well, hell, I think it is just a party. 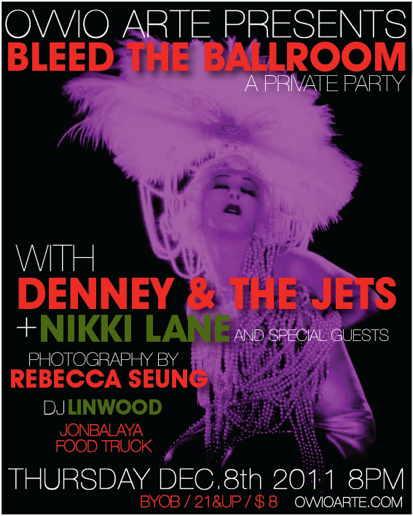 The first party is tonight starting at 8pm, and there will be a photography show by Rebecca Seung of Get Bent, but I am telling you about it because there is going to be some music from some Nashvillans that you know.  Denney & The Jets will be playing tonight along with Nikki Lane.  Those Darlins’ drummer Linwood Regensburg will be dj’ing.  Based on some twitter activity from yesterday, it sounds like the some Ettes are going to be there. 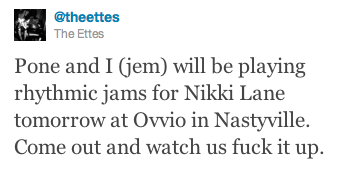 Things get started at 8pm tonight, and it costs $8 to play.  This link will give you something to plug into your smartphone, GPS, whatever.  It is a BYOB affair, but supposedly they will have some drinks in case you are too lazy to stop at the gas station.  Food will be catered tonight by Jonbalaya food truck.

This is just the first of quite a few weekly parties running through January.  According to the Cream this morning, other confirmed acts for upcoming parties include Tristen, Natural Child, & Ranch Ghost.  So, block out some Thursday’s over the next couple of months, because these parties just sound like fun.