Get to Know: Diamond Rugs

Supergroup news… Deer Tick leadman (and new Nashville resident) John McCauley has joined up with Ian Saint Pé of Black Lips, Steve Berlin of Los Lobos, Hardy Morris of Dead Confederate, and Bryan Dufresne of Six Finger Satellite to bring us a side project known as Diamond Rugs (you think that could come from, “D(amn), I am on drugs”?).

These guys have recorded an album (set to release in the spring), and they will play their first show at The Earl in Atlanta on December 29th with Dead Confederate.  If you happen to be in the ATL (which I will, woo hoo) during that time, you can grab your tickets here. 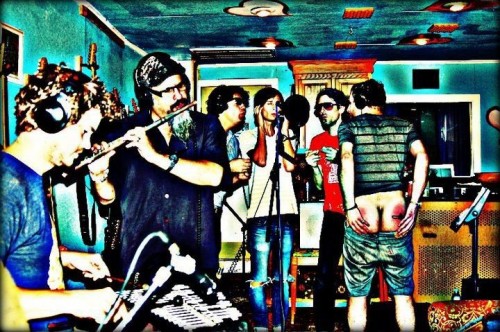 We don’t know a ton about these fellas yet, except for this cheeky artwork, a season appropriate (content not so much) yuletide flavored song, and a video (via Rollo & Grady) of that same song shot early last month out in LA.  Check those out below.  I would imagine that we might get a Nashville gig out of these guys sometime in the not too distant future.  I’ll keep my ears perked for that.  In the meantime, get to know Diamond Rugs.