The Daytrotter updates just keep coming this week.  While the little studio (known as the “Horseshack”) in Rock Island, Il keeps pumping out great sessions by more up and coming artists than you can keep up with, there was also an announcement that they were going to have to start charging folks a couple of bucks a month for access to the site.  For now, you get a one-week “trial” period after your next log in.  It’s worth it for me to pay that, but is it worth it for the majority of their visitors?  I don’t know the answer to that, but I wish them the best of luck and hope you will continue to support them.  What they do is pretty awesome. 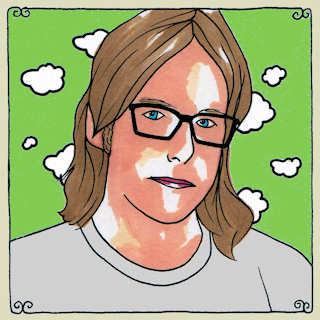 So, we just talked about the Gun Lake session Daytrotter dropped on Tuesday.  Well, yesterday, they dropped a session by Nashville’s Carl Broemel.  We’ve talked about Carl playing his little set at Station Inn during Soundland, and it’s not too hard to find Carl playing around town.  If you can’t find him on any calendars, then you might want to check the touring schedule for My Morning Jacket, who Carl plays guitar for alongside frontman Jim James.  I first saw Carl playing alongside Bobby Bare, Jr at The Basement in May (I think) 2010.  I was visiting Nashville trying to decide if I was going to move here or not, and I have to say that show helped my decision.  Bare Jr. has always been a favorite, but to be 10 feet away from the guitarist for MMJ on a random night in Nashville… blown away.

So, you know he’s talented, and now you can get to know some of his solo work as well.  Click here to check out the Daytrotter session.  Enjoy!