Get To Know: Gun Lake

This has been in my email inbox for months.  I first heard Gun Lake (aka Mark Fain) on Turntable several months ago, and met him right there in that little land of avatars.  Luckily, I wowed him with this video clip, and from there a mutual appreciation was born.  Actually, I don’t know how much appreciation there is from his end.  I mean, I doubt he is gonna invite me for a sleepover or anything, but he thought the video was funny and I dug his music.  So, anyway, I’ve had his email in my inbox for a long time, and I’ve been waiting for him to play in Nashville, so I could tell you about him and his take on indie folk.  Well, there isn’t a Nashville date right now, but I decided I better get on it because he is probably not going to be under the radar for that much longer.

Mark has been playing music since he was nine years old, and spent his formative years in Michigan not much differently from the rest of us (family vacations that shape a childhood, high school days splattered with an expanding palate of musical influence, and life-altering relationships)  His debut record Balfour is a beautiful folk tale of loss and angst that splashes memories of such a childhood.  To me, it channels the creative spunk of a Sufjan Stevens or Andrew Bird with harmonizing qualities that remind of Fleet Foxes.  Balfour makes me reminisce to Bon Iver’s 2008 debut LP, For Emma, Forever Ago.  While Mark didn’t lock himself in a cabin for three months to write and arrange his record like Justin Vernon, it sounds like Balfour was a therapeutic rite of passage for him… a way to heal and grow as a man and a musician. 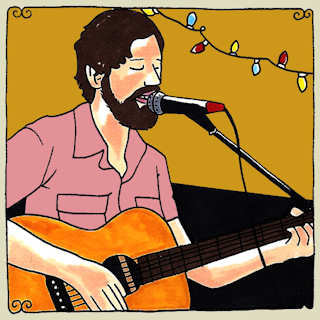 So, why am I writing you about this today of all days?  Gun Lake released his Daytrotter session yesterday, and this is a follow up to three days of playing as part of the CMJ Music Festival in NY.  It is apparent that the word is getting out, and I wanted to get this nugget out to all of you.  I’ve attached a bandcamp player below where you can listen to (and buy for $5) the debut record Balfour.  You definitely need to check out that Daytrotter session too.  Gun Lake is working on their follow up record right now, which Mark describes as sounding bigger and less restrained, and hopes to swing through Nashville in the spring of 2012 while touring in support of that follow up record.  As always, I’ll keep my ear to the ground, and will let you know when that date happens.  In the meantime, enjoy getting to know Gun Lake.