Ok.  You never know where Tonight in Nashville is going to lead you…  is it going to be a shoegazey night of sipping cheap beer?  or maybe you are going to get caught in a frothy moshpit while holding up stage divers?  Yeah, those were both last night…

Well, tonight you need to get over to 12th & Porter to get your dance on with Nicos Gun.  Philadelphia’s electro-funk rockers, Nicos Gun are stopping through Nashville on a tour that leads them up to the CMJ festival in New York before numerous other stops in the northeast.  It’s your chance to see this buzzy-buzz band now before commercial radio wears them out in 6 months (ala Foster The People).  As Spinner wrote about them after SXSW, “if SXSW is where the world meets the future, then we’d like to introduce the future to Nicos Gun.” 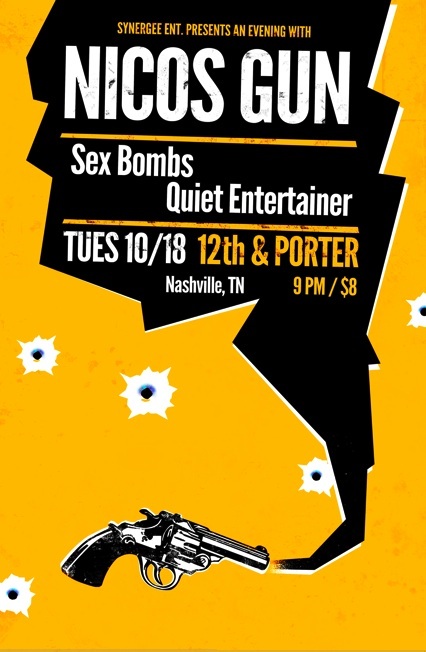 When not on the road Nicos Gun is hard at work in their hometown of Philadelphia.  Whether producing a wide array of DIY music videos that can be viewed on the band’s YouTube Channel or spending countless hours in the studio recording the full length followup to their self-titled EP, constant creation has been their focus.

You can take a listen to that EP below, and then you can head over here to grab tickets to the show tonight.  Tickets are all of $8, and things get going around 9pm with The Sex Bombs and Quiet Entertainer.