Get To Know: Papa

Did you see Girls perform last month at Mercy Lounge?  If so, I hope you got there early enough to see the opener, Papa.  These guys were awesome.  It was a high energy kind of soul music packed with pop hooks that you could immediately tell was the musical darling of drummer Darren Weiss.  The funny thing was trying to place him.  He looked so familiar to me.  It wasn’t until I saw Girls that I understood that I seen Darren and guitarist, Evan Weiss, hours earlier during the live set that Girls webcast from Grimey’s in Nashville (I wish that video was still available).

In speaking with Darren, I’ve learned more about Papa the band.  They are a Los Angeles based four piece that are friends, collaborators, and currently touring with Girls; and they are honestly building quite a reputation.  I’ve seen a lot of tweets coming through from those with clout in the music world bragging about Papa putting on a really great set before Girls.  Papa is comprised of drummer Darren Weiss and his longtime friend and collaborator, bassist Danny Peasant.  Throw in some funky keys and Darren’s big brother, guitarist Evan, and you have an R&B-inspired, rocking good time.  You wanna know how much fun it is?  When I was walking up to Mercy Lounge that night, I saw Darren doing jumping jacks in the backstage windows.  You know you’re getting pumped for a high energy set when you are doing some backstage jumping jacks.

Papa is currently on tour with Girls, and Darren and Evan will continue to be for a quite a while as the Girls tour continues through Europe and Japan.  But, Darren has told me that this is not a side project for him.  He is as passionate about Papa as Christopher and JR are about Girls, and he is already looking forward to getting back and starting to work on a full length release for Papa.  A tour is likely to happen after that, maybe as soon as early 2012.  It will probably be a while before you see them here in Nashville again, but I’ll keep my eyes open and let you know when they do come through.

Their debut EP, entitled A Good Woman Is Hard To Find, released today.  I have a link to the EP below so you can listen before you buy.  Check it out, I think you’ll dig it. 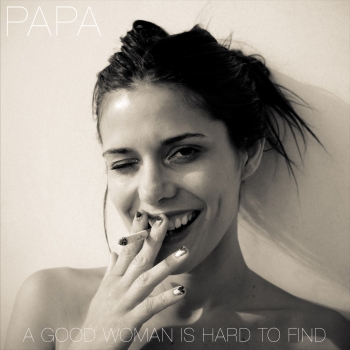