It’s the worldwide, weekly phenomenon that is Friday!  It’s the day when you happily throw your work down and race out of the office to revel in some much deserved celebration that you have survived another week.  What are you going to revel in tonight?  How about some great live music from some homegrown Tennessee rock bands over at The End for only $5?  Note: don’t be fooled by the word “cancelled” on The End’s website.  I have confirmation that the show is happening tonight. 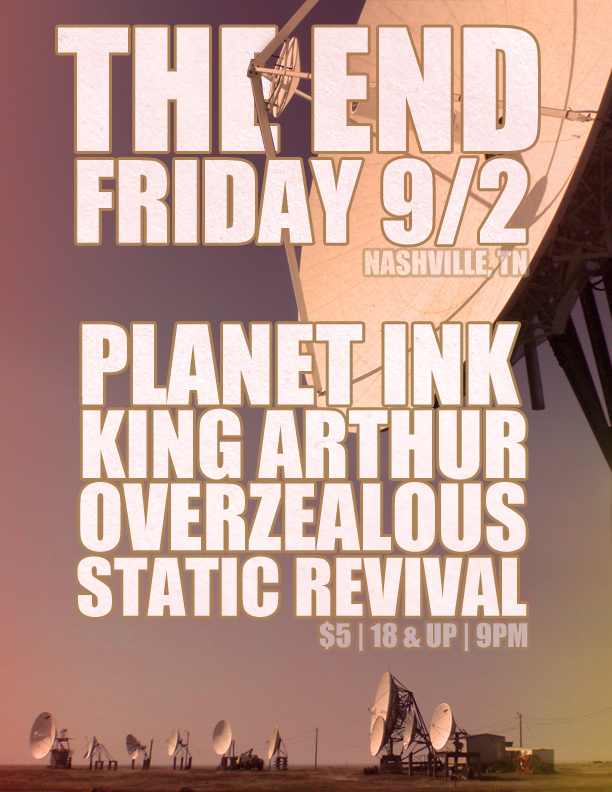 Hailing from Murfreesboro, Tennessee, Static Revival is a compelling tour de force of raw intensity and emotionally gripping philosophy designed to elicit a specific response in their listeners.  Their lives shows are an experience, offered in layers; a multi-dimensional musical statement, willing to reveal itself to whatever extent its listener cares to take notice. On its exterior, the combination of musical styles is found accessible to a wide range of people who may care to never look or dive any deeper into its musical expression. For those who do care to dive deeper, however, Static Revival offers much, much more. The band’s lyrical content is little if not thought provoking, focusing on specific emotions and feelings designed to elicit a direct response in its listeners. Utilizing philosophical and emotional ideology their set list reads as a veritable catalog of human thought.  All while mixing the unmanicured grit of alt-country with rock n’ roll fervor and angst.  The show is in anticipation of their forthcoming EP, Thank You For Being You.  Oh, and did I mention, these guys are just the opener?!?  Make sure you get there early to catch them.  They hit the stage at 9:30 prompt.

Then stick around for Knoxville’s Overzealous, Alabama’s Planet Ink, and another Murfreesboro band, King Arthur.

Planet Ink have crafted a no frills rock sound that showcases their high energy performance and loud, in your face songs that combine searing rock riffs and catchy melodies. Their music is delivered with the precision more commonly found in seasoned musicians two to three times their age, yet they still command the youthful exuberance necessary to pound out unbridled rock and roll.  Their unique style has developed over the last five years through steadily playing festivals, headlining smaller venues and opening for internationally known acts.

Murfreesboro, Tennessee’s King Arthur is the reincarnation of the Lake, a group that found soul mates in local Pavement enthusiasts Target Market (R.I.P.). If that kinship is not a hint about the sort of breezy slack-rock we’re dealing with, consider the title of the Lake’s 2009 EP Have A Kick Ass Summer. King Arthur made a few significant alterations to its predecessor’s wardrobe; most obviously, former front man (not the Police drummer) Stewart Copeland surrendered his lead vocal duties to Alicia Bognanno, who recalls Broken Social Scene’s powerful sirens. Its debut EP Ad Inexplorata is four tracks of deep-end cannonballs, charred marshmallows and poolside radios blasting “The Boys Are Back In Town” on infinite repeat. King Arthur is the result of a change in seasons, but its school’s-out vibe remains eternally intact.
– from the River Front Times

Overzealous is a group that hearkens back what is now uncommon in rock music: they produce songs, not a lamentation on negative feelings that seems to prevail in today’s world. Their music is hard but feels good. Their sound can in some ways be seen as an homage to the pedigree of Knoxville, their hometown: one of their major influences is Superdrag, another fine band from the South. They even draw their music from groups like the Beatles and especially John Lennon’s music in particular. However, ultimately Overzealous has its own, unique sound; one that is dedicated to a catchy, melodiously infused music.  This unique sound caught the eyes and ears of tv and movie producer Brad Kimmel of Bradley David productions. Kimmel liked the look and material of overzealous so much that he hired the band to perform 5 original songs for an independent film idea he had called Novem which released in 2005. overzealous also starred in the film: playing members of a 70’s college band who tragically die in a van accident after a week of recording in the summer of 73′. The film has won several awards at indy film fests across the US.

What ever your fancy, this is a good spot to revel your two days of freedom.  Click the band name links to listen to some of their tunes, and get out there and see some live music tonight.