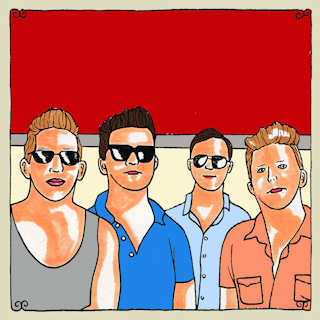 Do  you know about Nashville’s own Mona?  Well, if the predictions are correct, you are going to know about them very soon.  Mona is blowing up in the UK right now.  They were long listed in the BBC’s Sound of 2011 poll (a UK poll of bands that are about to get huge).  Past winners of this annual poll include 50 cent & Adele, and the runner ups are almost every band in your iTunes now.  They also won MTV’s Brand New: for 2011 listener generated poll.  Last year’s winner of that (again UK poll) was Justin Bieber.  Not sure if that is positive news or not.

Mona is currently touring through a string of festivals in Australia, Japan, and Europe.  If you want to see them back in the states you will either have to go to Austin City Limits Festival or Music Midtown Festival in Atlanta (both in September).  Hopefully, we can get them on a local bill here in Nashville when they get back to town.

In the meantime, you can check out the new Daytrotter session that just released today, and you can buy their new self titled record from your local record store.

Tags: Brand New for 2011DaytrotterMonaSound of 2011