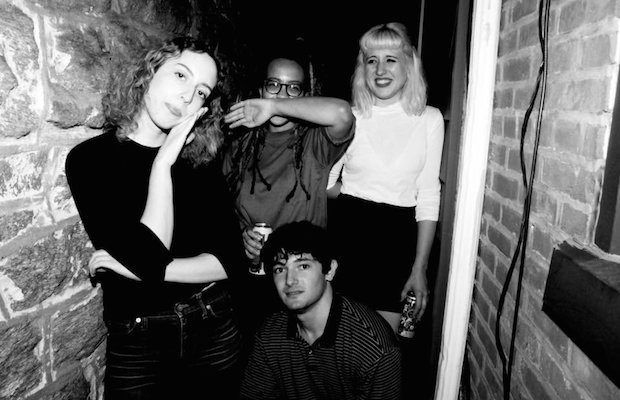 A new act out of Philly you should have an eye on, Corey Flood are fronted by Litter bassist Ivy Gray-Klein, who never planned to be a singer, but found herself on the mic after a last minute lineup shuffle ahead of the band’s first show. Rounded out by guitarists Noah Jacobson-Carroll and Em Boltz, and drummer Juliette Rando, the group released their debut EP, Wish You Hadn’t, earlier this year though Fire Talk Records, and with their goth rock, moody, dark pop vibes and clear affinity for post-punk, they’ve already been drumming up plenty of positive buzz.

The group pass through town tonight, May 24 for a performance at DIY house show space the Pussy Palace, and they’re joined by likeminded local grunge pop favorites Idle Bloom, new project Peachy (impressively featuring members of Mom & Dad, Roman Polanski’s Baby, and Pujol) and folk-tinged alt/indie rock singer-songwriter Carmen Canedo. That’s a hell of a bill, and a very cool crop of bands to see in a DIY setting. As always, we remind you to respect the house, be sure to donate the posted cover to help out the touring band, and keep the address (which you can find with an easy FB search) on the down-low. Preview the lineup below!

Corey Flood, Idle Bloom, Peachy, and Carmen Canedo will perform tonight, May 24 at Pussy Palace. The show is all ages, begins at 8 p.m., and admission is $7 at the door.