The 16th annual Bonnaroo Music & Arts Festival is just over a month away, June 8-11 in Manchester, Tenn., and that means the last few details for this year’s fest are finally rolling in. Following the main stage lineup announcement, the comedy slate, preliminary daily lineups, the introduction of a “new” stage, the announcement of this year’s Club Stage performers, news of this year’s late night acts and new camping experiences, and the cinema lineup, we’ve finally received the last crucial bit of info before Bonnaroo commences: the full schedule.

Announced this morning, the schedule comes on the heels of expanded daily lineups, so while none of the general outline is a huge surprise, it’s still nice to finally have a chance to plan our weekend out in detail. Bonnaroo has the fest down to a science at this point, so there aren’t many major changes (and only a few painful conflicts) other than things we already knew to expect- like a whole stage devoted to EDM and hip hop, which effectively killed the short-lived Kalliope stage- but the schedule does reveal one interesting piece of news: apparently, at least according to the way they’re programmed, comedy and cinema have been consolidated into one space, rather than the Cinema Tent and Comedy Theatre that have existed for most of Bonnaroo’s history. Music’s always been the main attraction, so it’s not a huge shock, but the change leaves us curious how else Bonnaroo’s largely-predicable layout might be changed up this year under new ownership.

Head here for the interactive schedule, check out a static image version below, be sure to download the Bonnaroo app (the new app this year is a whole separate download, rather than an update to the prior version – confusing, we know), and, if you haven’t yet secured your spot, grab tickets here! 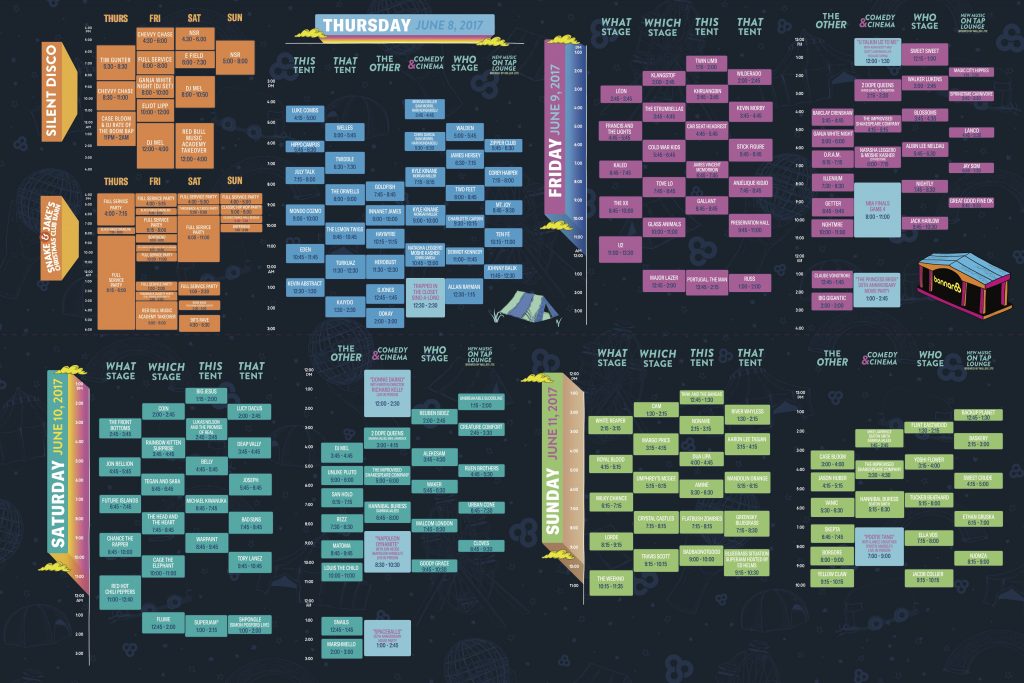