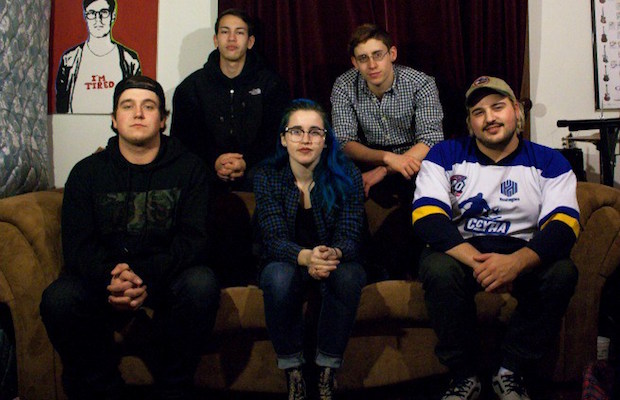 The midwest has long been a hotbed for earnest, emotional, indie-derived emo and pop punk, and Columbus, Ohio up and comers Everyone Leaves certainly seem shaped by the rich musical history of the region. Founded in 2012, the group have so far released just a handful of singles, splits, and EPs, and are gearing up for their latest, a new EP called The Lonely End, due out Oct. 14 via Little Heart Records (pre-order it here). Brutally honest in how they portray themes of insecurity, doubt, and emotional struggle, the band’s music seems often to have a unique and underlying lining of hopefulness, and judging their early buzz so far, they seem destined to follow in the footsteps of breakout peers like Foxing and Microwave. Ahead of their new EP, Everyone Leaves recently premiered a stellar new single called “Head in a Vice,” and shortly before that announced a run of shows that will bring them to Nashville Oct. 29 for a performance a house space That 70’s House. A definite emerging artist to keep an eye on, we can’t recommend enough giving their new single a spin, then catching them in person while they’re still playing house shows! Expect to pay $5 at the door, and plan to dress up, because it’s Halloween weekend that it’s a costume party.