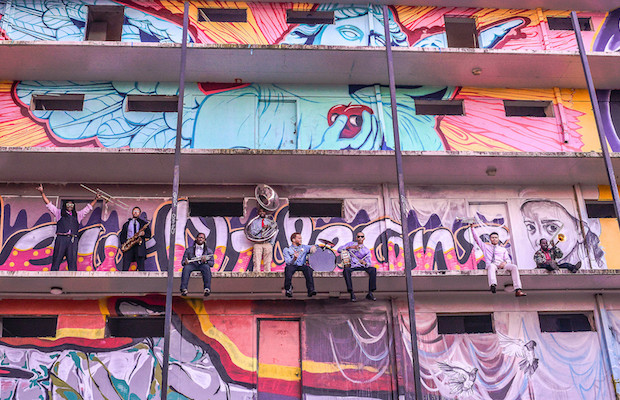 We were first introduced to New Orleans’ New Breed Brass Band at last year’s Bonnaroo, where the second-line brass outfit served as one of the summer’s most unique performers. Not relegated to the stages or tents, they led two festive, official parades around the ‘Roo grounds, and performed in the Christmas barn, a definite odd man out compared to that space’s more DJ and electronic-geared offerings. A later addition to this year’s lineup, our assumption is that the group will fill a similar role this summer, though their specific set times and the 2016 parade schedule have yet to be revealed (you can get a taste of New Breed’s inaugural Bonnaroo in their recap video below).

Formed in 2013 and compromised primary of NOLA natives who’ve been playing music since childhood, New Breed Brass Band combine elements of funk, rock, jazz, and hip hop, taking the tradition of southern brass music and updating it with a contemporary flair and poppier repertoire. Influenced by artists like Dirty Dozen Brass Band, Karl Leblanc, Dirty Dozen Brass Band, and Trombone Shorty (who co-manages the band, and who they played Nashville in support of late last year), the nine-man group used their lifetime of ensemble experience to quickly hone a fantastic stage show, scoring spots opening for the likes of The Fray, Red Baraat, and Dr. John, and ascending the ranks of the brass band community. They’re obviously a favorite at Bonnaroo, so, if you missed out on the fun last year, be sure to keep an eye out for this somewhat off the radar festival experience this time around!