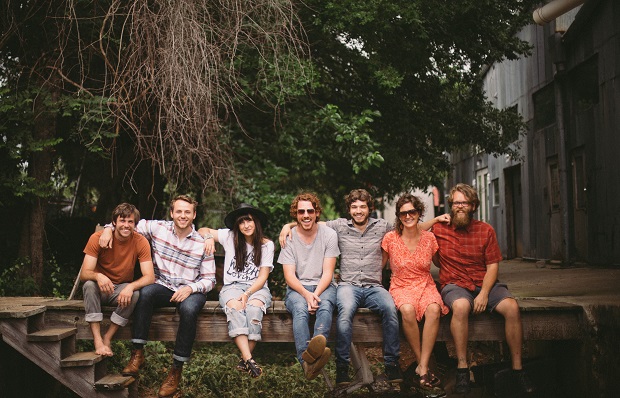 Family & Friends are a seven piece indie folk-rock band who met and formed at University of Georgia and through the Athens music scene, under the mantra of “good music, good people.”  A consistent theme running through the band’s music and live show is their focus on being a “collective” with the ideology that the sum is greater than all of the individual parts at the foundation. Adding to the band’s unique vibe is the fact that their two drummers face each other, allowing them to feed off each other’s intensity. We caught their entertaining, high energy set at Music City Roots back in February.

The eclectic septet will be independently releasing XOXO, their second EP, on July 17.  This followup to their 2014 release, Love You, Mean It, was recorded at Echo Mountain studio in Asheville, NC with producer Dan Hannon (Manchester Orchestra) and all five songs are originals.  Check out Family & Friends performing “My Life, My Love” live at Atlanta’s Glow In The Dark Studios below, and be sure to catch them for FREE at Centennial Park for Musicians Corner on Saturday, June 20. Details here.