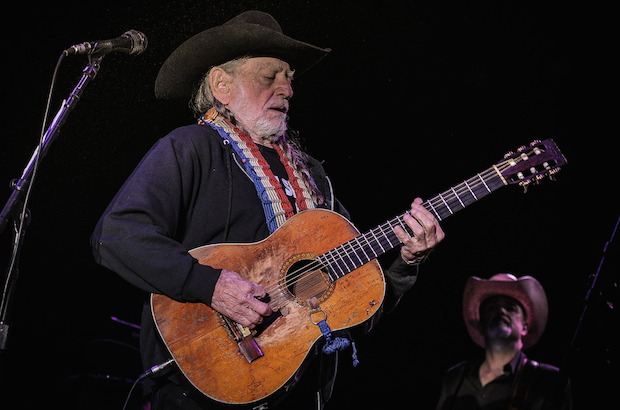 What does it feel like to be a legend in your own time? Hell if we know. No Country witnessed not one, but two artists at Fontanel on Friday who may be able to give you some perspective on that… Alison Krauss & Willy Nelson. It should go without saying it was a magical evening under the stars, but we’ll enlighten you and share a couple of pics from Brad Hochstetler.

Alison Krauss opened up the night, but you would never call Krauss an opener. Accompanied by a world class band, including the incomparable Jerry Douglas, Alison rolled off a never ending slew of hits.  The crowd was mesmerized every step of the way. And for an encore? A gospel medley that would make the devil convert.  This woman sings from her soul and at least half of the crowd related to the emotion and pain in her songs with tear soaked eyes.

And then there was Willie … living fucking legend… Nelson! We’ve seen Willy many times, and, with each show and each passing year, we realize that time is fleeting.  The, now 81 year old, Nelson, at times sounded as if he were fighting his guitar, trying to will it to play the notes that were effortless 40 years ago.  However, that doesn’t mean that we weren’t treated to an evening filled with chart topping super hits. We warned Willie “virgins” of the emotions that might percolate during the show. They learned quickly the power of this man of small stature but larger than life energy. We laughed. We cried. We cursed. We danced. From the set opener of “Whiskey River” to the finale, featuring Alison and Co., of “Roll Me Up and Smoke Me When I Die”, it was another heavenly evening in the presence of musical divinity.