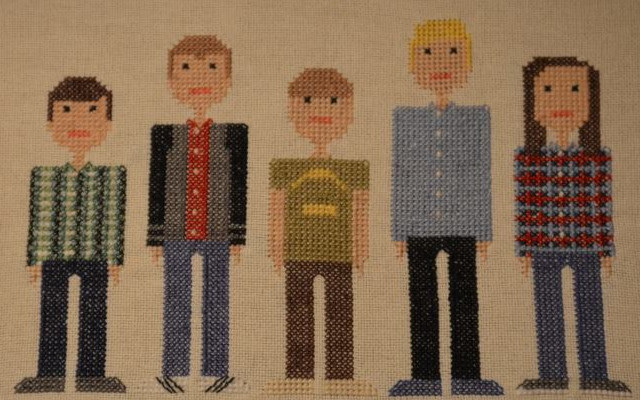 If your ears were fortunate enough to be tuned in to the soothing frequencies of Lightning 100 on the night of October 28th, chances are you heard No Country’s own Matt Hall spin a few tracks on the radio show The 615, which focuses on local artists and performers. One artist Matt played was Staying for the Weekend, whom we first caught during their stunning set at last year’s Bonnaroo. Back then, the group were playing in support of their second EP, Camp Empathy, but now this upcoming indie rock quintet is back with a new EP, S F T W. You can hear that EP (as well as a boatload of covers) at their EP release show tonight at 9 p.m. This will actually be a house show at 2613 West Linden Avenue. Opening for Staying for the Weekend is fellow Belmont band The Astrochimps and Baltimore indie darlings Sun Club. As far as we know, this house show is free and all ages, though seeing as two of the bands go to Belmont, expect this event to cater towards a younger crowd.

Due in no small part to the popularity of their single “Giving Tree”, local indie rockers Staying for the Weekend were picked up by Bonnaroo to perform a set on the Miller Lite Stage. Eager to continue evolving from there, the band has pulled out all the stops for their new album, which is rather straightforwardly titled S F T W. Each of the four tracks on this EP demonstrates a different side of this Strokes influenced band, and this effort may very well be one of the better local releases left this year. Unfortunately, readers cannot pick up that album digitally until November 19th (though you can hear the single below), but 7″ vinyl copies will be available at the house show tonight. As if that’s not incentive enough, word on the street is that SFTW will be providing beer for everyone, so at the very least you can come grab a free drink while hearing some awesome indie tunes.

If you’ve never heard of Sun Club, do yourself a favor and play the track embedded below. The Baltimore based poppers use experimental touches to give their tracks that edge you just don’t hear that often anymore. Fans of Adam & Naive or even Animal Collective will probably find Sun Club very much to their liking. The tunes are undeniably fun and create the perfect party atmosphere.

If catchy indie rock is your thing (and really, it seems like it’s everybody’s thing nowadays), The Astrochimps are your band. The group’s lo-fi sound perfectly captures the feeling of a cheerful afternoon, but don’t let that fool you: these guys can throw down when need be. Will they tonight? Find out for yourself, but first give this tune a listen.

Staying for the Weekend, Sun Club, and The Astrochimps will perform 11/15 at 2613 West Linden Avenue. The show is all ages, begins at at 10 pm (doors at 9 pm), and tickets are not available, since this is a house show.