This man was the inspiration for my weekend. Chief Bird Rattler (1950 Oil Painting) by Elizabeth Davey Lochrie, Western painter of Blackfoot tribes in Montana

LAWD, I’m exhausted. I’ve been to a lot of concerts this week. Black Angels, last Sunday. East Nashville Underground ‘s Friday was amazing. East Side Brew Ha Ha and Eastside Hootenanny happened Saturday. Last night, I went to the first part of the Nashville Symphony’s Elijah (which was incredible) and ended the evening at ENU’s finale. Meeting all these crazy-fun people has been wonderful.

Not only am I attending concerts…I’m putting on a Chamber Music Underground benefit concert to morph my group into an official non-profit while showcasing the historic beauty of East Nashville. I find time to write these words between practice sessions of Shostakovich. (Harry Potter stole his “look”. Shosti wo’ dat swag bettah. Just wait. Daniel Radcliffe will star in his bio-film in 20 years.)

Ha. Yeah, it’s just how I roll. My friend, Matt Holland visiting from out of town said, “Aren’t your ears bleeding from all this music? Shit!” Realize, People born in Music City have a high tolerance for whiskey and music consumption.

If you weren’t at the 5 Spot on Thursday night, lean into the computer screen right now. *THUMPS FOREHEAD* What da HAIL were you thankin’?! The weather was perfect for a park-n-hike. It’s a good thing, ‘cause cars were going all the way down Forrest and I had to park at 12th and Gartland. The people sitting on Red Door’s stuffed front patio looked like wiggling sardines trapped in a Hawaiian throw net. I threw my hand behind my head to wave at them as I slinked into the 5 spot. Inside, sounds of cowboy rock convinced me that heavy metal door I just walked through had magically tranformed into snappy wooden saloon doors. 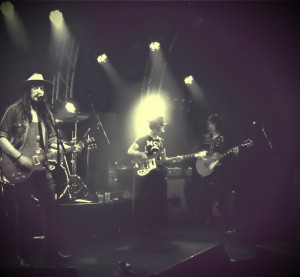 Zach Ryan and the Renegades have the smoothness of running your hands palms-down across dark-green poker table felt. They are a new group that journeyed from the deserts of Las Vegas to settle here in Nashville. While everyone was working on their first couple of drinks, heads were turning and boots were tapping on the hollow legs of bar stools. Drinking Jack through a sip-stirrer while smiling is hard, but with a sound like this, you just can’t help it. This tumbleweed music exhibits that effortless feeling, yet possesses considerable finesse like we find in artists such as the Eagles, Tom Petty, and John Mellencamp. It’s 100% pure beef. I can’t wait to hear more! 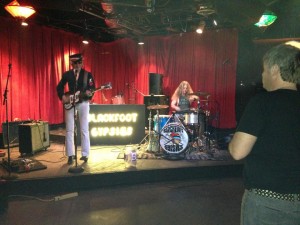 They sing about Love Makin’ and Body Shakin’ while the ground they be on Quakin’.

The Blackfoot Gypsies. I just can’t say enough about them. Yee Ha!

What in TARNATION?! Those outlaw-gypsies immediately took hold of our reins from the desert cowboys, saddled up–boots in the stirrups, and horsewhipped us all the way to the Deep South–Harmonicas blazing.

My friend Holland smirked and said, ‘That gypsy likes to grind his pelvis like Elvis, doesn’t he. Pimpin’ sailor hat.‘ (Apparently they don’t do that in Arkansas) I laughed so hard, ice jumped out of my glass.

I love this song:

EVERYONE knew it was Ricky Dover’s (of Zach and the Renegades) birthday. His scraggly hair and moustache was popping up everywhere. Somehow a new drink manifested in his hand, like, every five minutes. ‘ROCK AND ROLL IS THE WAY OF LIFE!’ he chanted. The funniest part of the whole night was when we put our arms around that stickbug waist of his and formed a chorus line to BFG’s Rock It Up. The line spontaneously began stage-right with relaxed standing and ended in linked-up-drunk-shoulder-to-shoulder combat. It was like playing ‘crack the whip near the amp stack’..you’ll never guess in which part of the line I was…HAH. When 1776 rolled out, the lyrics I’m a reptile living in this LAND brought Jim Morrison to my mind. He was known as the Lizard King. But Thursday night, it was Ricky who held that title. *Points* Matt and Zack were Misters Mojo Risin’. Yeah boyz. I know they had fun at Muddy Roots this weekend. 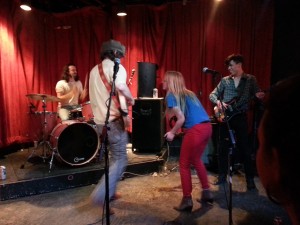 With bathroom doors slamming around and smoke breaks winding up, the Static Trees were ready to uproot us. They are Nikki Barber and Dylan Whitlow who traveled from Gettysburg, Pennsylvania not long ago. The Static Trees have that 1960s vibe garnished with fresh modern indie-pop flavoring. These two have a passion for making music together. It’s obvious looking at the physical positioning of their bodies during performance. You know, when playing in classical chamber groups, we often place the instruments strategically to invite body language communications and texture balancing. This set-up artistically enhances the music we play. Example: When playing a clarinet quintet (Mozart or Brahms), I sit in the middle to ensure direct eye-contact with the first violinist and not interfere with the string quartet dynamic. This way, the sound is more cohesive: a tightly woven, stronger effect.

The Static Trees understand the importance of full-bodied music. They have a unified rock vision which sends sweet, powerful waves to every listener. Shake that tambourine like you live in Tennessee, Static Trees. Come on….

Check out their music here: