I know a lot of you already know about the shows on Cannery Row tonight, because we had quite a few submissions in our recent giveaways for Cold War Kids at Cannery Ballroom and Wavves w/ Fidlar & Cheatahs at Mercy Lounge.  Congrats to all of our winners on that one, and, if Rock n’ Roll is your jam for the evening, you can still grab tickets to those shows here. 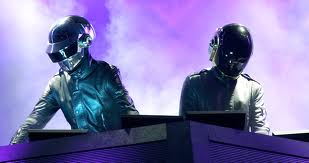 If you want more of a dance vibe from your evening, or you are as excited as the rest of the world for the upcoming release of Daft Punk’s newest record, Random Access Memories (due out on May 21st on the french robots’ Daft Life imprint through Columbia Records), then you will probably want to swing down to Exit/In for their Daft Punk Tribute Night: One More Time.  We have a special sneak peek at the first single from the new Daft Punk record recorded from Coachella last weekend, and lots more details after the jump.  Get out and see some live music tonight!

Tonight at Exit/In is going to be the closest that you can get to the French superstars for a hot minute.  Tonight’s replicates don chromed helmets and FULL SCALE pyramid stage to create the perfect Daft Punk inspired vibe and perform an awe-inspiring encore in electro-luminescent suits, reminiscent of the “Alive 2007” tour.

Talk about awesome promotional coincidence, over the weekend, Daft Punk teased the Coachella crowd with a teaser video offering up the first taste of the new record with the track “Get Lucky.”  The new track features the robots playing guitar and drums while vocalist Pharrell Williams and famed Chic co-founder Nile Rodgers carry us through the funky disco-fied jam.  They also leaked the other collaborators on the record including: Animal Collective’s Panda Bear, Strokes’ frontman Julian Casablancas and disco innovator Giorgio Moroder, along with house-music producer Todd Edwards, DJ Falcon, Canadian singer/producer Chilly Gonzales and celebrated ’70s songwriter Paul Williams.  They have even set up a “Collaborators” series with some very cool video interviews that you can check out right here.  You can check out the video for “Get Lucky” below, and, after you get in the mood, grab tickets to the show at Exit/In right here.