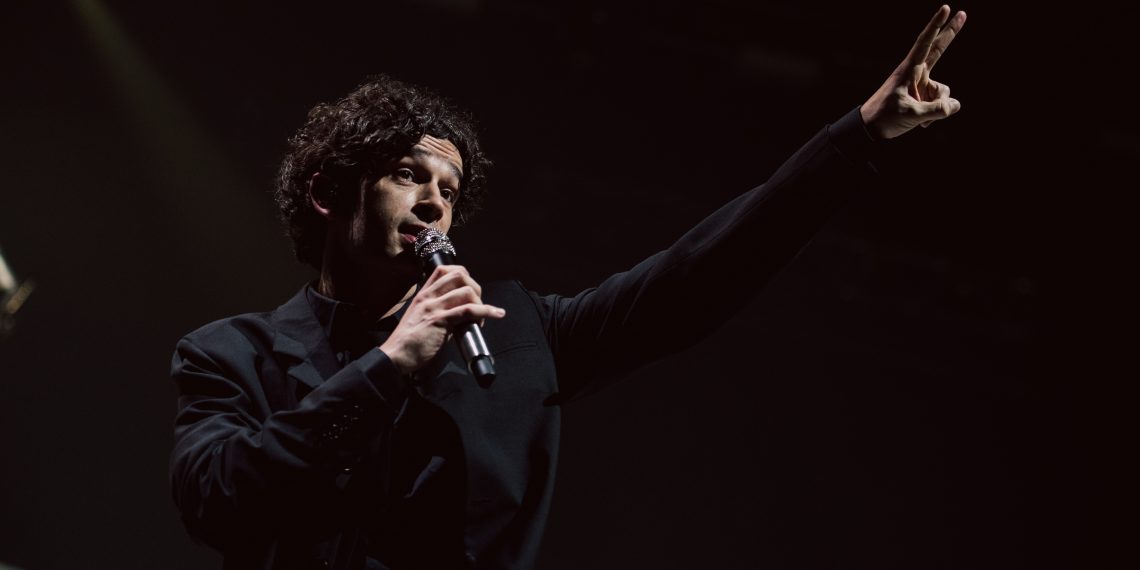 Review by Tess Schoonhoven. Photos by Jordan Curtis Hughes, courtesy of the artist.

When The 1975 broke their 2022 silence and released “Part of the Band,” the first single off their latest record Being Funny in a Foreign Language, the reaction was heavy. Fans of the indie pop band’s decade-long career found rejuvenation and ingenuity in the latest work, an attitude carried through to their sold out recent show at Municipal Auditorium, their first in Nashville since 2019.

In an industry where artists carve out sonic and visual eras with their music, The 1975 hit a new stride with their latest effort. A blend of dance-pop and alternative auras, the record both poses a new phase for the band and serves as a culmination of so many aspects of the music we’ve grown to love. Transferred to a live environment, not only was there excitement behind the new music, but a sense of respect and belonging still residing in their past releases.

The 1975 had plans to tour their 2020 record Notes on a Conditional Form, but the COVID-19 pandemic put them on hold. Thus, the anticipation for both the new record and this tour was high. Fans were ecstatic, lining up at the venue in the cold, early hours of Sunday morning to get a front row pit spot, rushing inside. The attitude was eager and held an excited sense of relief to finally see the beloved group live after such an extended period of waiting.

Logistically, the show played out as more than a concert but an entire experience- like a night at the theater- all the way down to set design and sound effects. The opening act, BLACKSTARKIDS, served as a hype, funkadelic introduction to the evening. Bold colors, ’90s style outfits, sparkly synth and drum sounds, the lively set was captivating, in a good way that simply demanded audience attention.

Anyone who’s seen The 1975 perform live in the past would recognize key, repeating components of set design- large digital screens, neon boxed lighting- but this show immediately started off differently. The stage was set up like a house, with furniture, lighting, windows, stairs, doors, static instruments, and even a working ceiling fan. It was a set, not just a stage. Similar to a play there were “acts” with set changes, lighting adjustments, and storyline pieces. The beginning segment imitated the band arriving outside the house in a car. Although the audience could not see the car we saw the headlights outside the tinted windows, heard the alarm sound and the doors shut. When the band entered the “house” one by one, they turned on lights and shut doors behind them. Curtains drawn as they arrived, they took their positions and began to play.

Starting with songs from Being Funny in a Foreign Language, the first act commenced. Healy- with entrancing charisma and an ever present look of longing- made his way through the house as they played, sitting on couches, at a piano and on the floor. Flask in one hand, microphone in the other, he pulled the audience into the music, like an actor delivering heated lines of an emotionally charged scene.

But it was a perfect blend of the painful cries behind songs like “By My Mistake” and “Change Of Heart,” and the elated romance of “It’s Not Living (If It’s Not With You),” “The Sound,” “Happiness,” and “I’m in Love with You.”

Groups of songs gave nods to the eras of The 1975’s music. Set design, and even the band’s outfit choices dropped easter eggs for long-term fans to recognize elements of past work. The door of the “house” lit up with bright white light at multiple points of the show- alluding to the neon framed door from the “Sex” music video. The house itself was based on “fallingforyou,” and Healy’s change into a classic unbuttoned black shirt for the finale act of songs brought us back into the styling of “Robbers.”

It was a full circle moment in particular to hear “About You” in the first half of the show, followed up by “Robbers” near the end of the set, as the new song was a continuation of the 2014 track. Starting the night with the new material and closing with older fan favorites, ending with “Give Yourself a Try,” from the 2020 album, made for a cohesive, yet surprising flow and contrasted the range of lyrical and sonic style the band has put on display throughout the past 10 years.

To that degree then, the show was also nostalgic. It wasn’t just a place to take in an iconic set from one of our favorite artists, but it was an evening of community. The 1975 has built a cult following over the past 10 years and their latest show in Nashville felt like a beautiful representation of what they have created through their music. Inspiring beyond just a good song, or a captivating performance- it’s a culture that finds its pulse in deep connection and space for raw emotions. Safe to say, we’ll be back for their next show as soon as they make it to Music City again.

All photos by Jordan Curtis Hughes, courtesy of the artist.