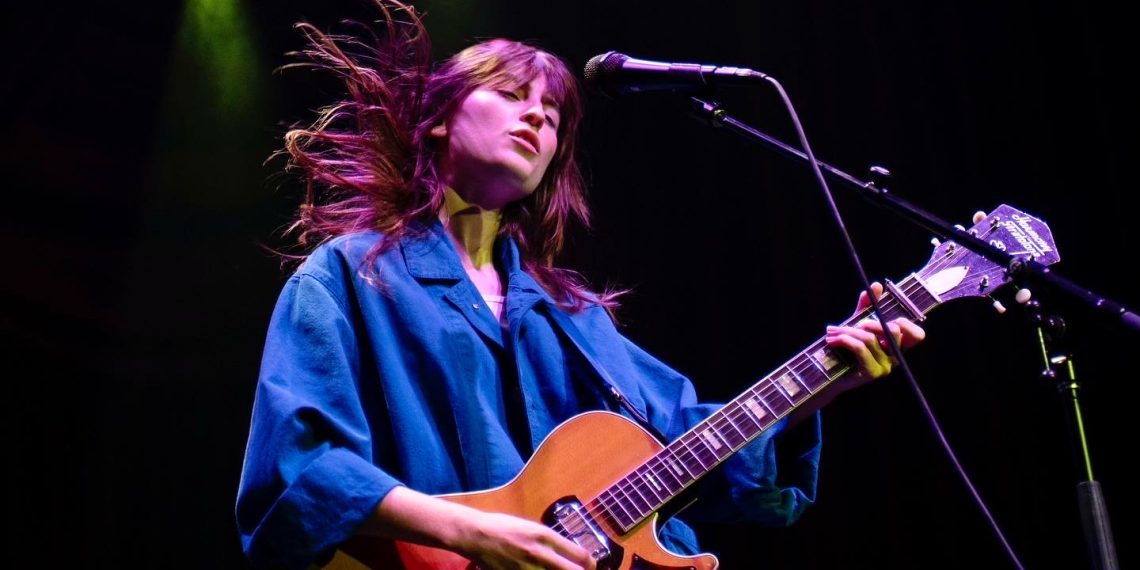 For the second time since the release of last summer’s wonderful and vibey LP I Know I’m Funny haha, after an appearance at the former Mercy Lounge last fall (it would’ve been third, if her show supporting HAIM at Ascend Amphitheater hadn’t been rescheduled from the spring to next month), indie folk singer-songwriter and one-time Belmont student Faye Webster returned to Nashville this week, for her largest local headliner to date at Brooklyn Bowl Nashville! Though she’s been a fixture in the indie scene for a number of years, the Atlanta-born Webster really caught our ear (and shot to wider acclaim) with 2019’s Atlanta Millionaires Club, and we were eager to see her latest tunes brought to life live, especially in a bigger space like Brooklyn Bowl. Webster- and opener Maya Hawke, of Stranger Things, fame- did not disappoint, delivering a night on intimate, lush, and entrancing indie pop and folk in one of the city’s coolest new performance spaces.

Though it’s been open for awhile now, between Covid, being away from town, and the circumstance of who’s playing where and when, this was my first time checking out Nashville’s new Brooklyn Bowl. I’ve been to the OG space in New York, and I have to say, this new purpose-built, franchised version (corporate though it may be), was a really impressive space, with a performance hall well-designed both to sound and look spectacular from anywhere in the room (the bowling was impressive too, but Brooklyn Bowl was clearly designed with a very venue-first approach). It was a sold out show and the place was packed, with a chatty and excited crowd who, though clearly the hip, young Faye Webster fan demographic, seemed to be just as curious as I was about what to expect from opener Maya Hawke.

My introduction to Maya Hawke was, of course, through her wonderful acting work on Stranger Things, but through that I also discovered her music, and was a big fan of 2020’s Blush. A bit of research ahead of the show told me she’s only performed live a handful of times, and this tour with Faye- which she’s only on for a few shows- is her biggest and most prominent yet. Decked out in all denim and met with huge applause, Maya, backed my a minimalist, acoustic band made up of a couple close friends and collaborators, launched straight into a very low-key, intimate, and stripped-down set. Though she played and bantered with all of the charm and charisma she brings to her acting roles, as a musician, Hawke is much more vulnerable, coming across as incredibly humble, a little bit nervous, and extremely authentic.

She spent much of the show seated, or crouched, or standing still and clutching the mic, letting her heartfelt folk songs speak for themselves. I noticed a few tunes in that I really didn’t recognize anything, a fact confirmed when the singer apologized for playing entirely new stuff from her upcoming sophomore record MOSS (I did, at least, recognize the couple of singles already out: “Thérèse” and “Sweet Tooth”), simply because she was so excited about her latest work. No matter; it was a really special and wonderful introduction to the multifaceted young performer, who, if she chooses it, is going to have a really impressive musical career ahead of her. In something of a twist, Hawke ended the show with a cover of Florida Georgia Line’s “Dirt,” not played for laughs but surprisingly earnestly, in her signature deconstructed folk style (something she’s apparently been doing all tour, not just a gag for Nashville). What a memorable Music City debut.

Wasting little time with the changeover, Faye’s staging was promptly set up, with a gigantic, inflatable approximation of a carved bust of the singer appearing at its center. Though her most recent release was actually an EP of orchestral reworkings of some of her songs, my understanding, which was confirmed by the instruments on stage, was that this would be a typical full band show, and not anything orchestral. Emerging onto the stage in all blue, reminiscent of the cover photo of I Know I’m Funny haha, Webster launched straight into that record’s opening track, “Better Distractions,” setting the tone for a night of chilled-out, hypnotizing, folk-tinged soft indie rock. Just as Maya’s more acoustic, stripped-down folk sounded phenomenal in the room, Faye’s layered, full band arrangements really soared (I watched from the middle of the crowd, by the bowling lanes, the back of the room, and in the balcony just to get a sense of the space, and not only did it sound great in each spot, but the views were excellent in most- save for the side back balcony- as well).

I’ve only seen Webster a couple times before, and this was, by far, the best, as she played with a confident, poised cool and laid back earnestness that really helped bring her wonderful and lush songs to life. Backed by both a keyboard and a pedal steel player (along with her rhythm section), I could hear the tinge of twang that has her led to her sound sometimes being called Americana or indie country, but it’s never come across that way to me; I just hear a breezy, r&b pop infused and, sure, folk tinged style of indie, and, live, that sound continued to be fairly genre-defying and just as soft and earnest as it is in recording. Though her songs are personal and confessional, Webster herself is quite affable, and joked around between songs, bantered, pointed out her parents (who presumably came up from Atlanta) in the balcony, and, when pressed, named Dose as her favorite hang from her brief time as a Nashville resident.

Most of Webster’s set was made up of cuts from her latest LP, and songs like “A Dream with a Baseball Player,” “In a Good Way,” and the title track “I Know I’m Funny haha” really stood out and elicited big singalongs, as did some fan-favorite cuts from her past records like “She Won’t Go Away” and the moving Atlanta Millionaires Club‘ standout “Jonny” and its spoken reprise (an audience member brought some levity after the emotional weight of the track by announcing his name as Jonny, to which Faye responded with a quick zinger). Like Hawke, Faye had an out-of-left-field surprise in her set too, proclaiming her love for Pokémon before launching into a hypnotizing instrumental cover of “Lake Verity” from the Diamond & Pearl games; a tune that has no business being so cool when fleshed out with organic instruments (I’m really hoping she’ll formally record her cover someday; it’s really, really cool).

Throughout her entire show, I (and the entire audience, from the vibe of the room) was so locked into Faye’s wavelength, wrapped up in a really special and personal and nuanced musical journey of personal expression and gorgeous instrumental arrangements. I’m a big fan of the singer’s records, but live, she brings some intangible, elevated feel to her work like few artists can. Clocking it at around an hour, my only complaint would be that the show felt all too brief (though I concede she played basically everything I wanted to hear), and after an encore of breakout tune “Kingston,” I was left thankful that Webster frequents Nashville so often, already counting down the weeks until a chance to see her again with HAIM.