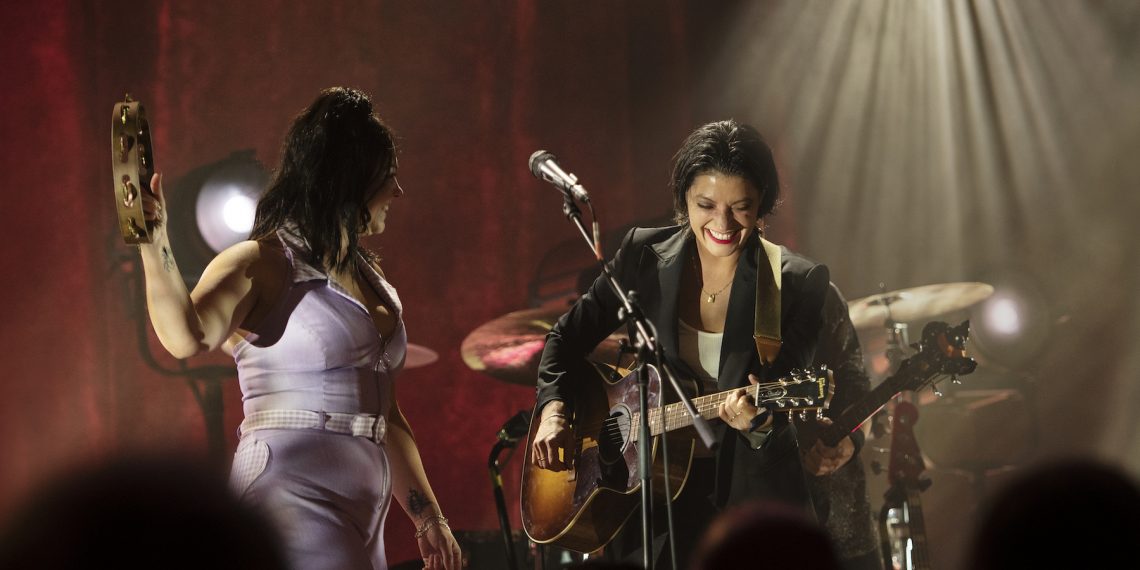 Review and photos by Mary-Beth Blankenship.

Three of indie music’s most talented and beloved singer-songwriters- Sharon Van Etten, Julien Baker, and Angel Olsen– recently brought their triple headlining Wild Hearts Tour to The Ryman Auditorium, a performance we’d been anxiously anticipating since it was first announced earlier this year. All known for lyrically pulling at the heartstrings (some more than others… we’re looking at you, Julien), these artists compliment each other perfectly, while still standing strongly in their own uniqueness, ensuring not a dull moment would be experienced through the night. While all three are known to play more intimate, stripped down sets, this tour is proving they have the capacity to shatter the windows, rather with a voice, a Telecaster, or both.

Starting the night off strong, Angel Olsen was greeted by a packed auditorium at the third stop of The Wild Hearts Tour. Surprising fans that might have taken a peak at the setlist from the first show in Virginia, she opened the evening instead of Julien Baker, (her co-headliner and beloved Nashville local).

Angel stepped into the spotlight, full band stretching across the stage, her hair and our spirits high. Her latest work, Big Time, feels like it was crafted specifically to play on The Ryman stage. The southern-tinged ballads, described comically by Olsen as “It’s not country… but it’s not, not country” came to life in a hauntingly beautiful way. Creating a hazy, romantic atmosphere that can only be found on a hot summer night in the south. On evenings like this, one can easily imagine what it felt like to sit, entranced, on a wooden pew in the Mother Church 100 years before. Breezing through her setlist gave time for the addition of the seven minute “Sister” from her well-loved debut album, My Woman. Singing along, I realized out of all the times I’ve listened to the song, I’ve never noticed it was so lengthy. A testimony to Angel’s ability to make you forget your surroundings for just a little bit. Dressed in a lilac, bell bottom jumpsuit that was no doubt the envy of many in the room, her voice rang through the rafters with the kind of power that leaves you standing in awe. A voice that sounds too exquisite to belong to this time and place. The rather warm auditorium prompted her to share memories of slippin’ slides and sprinklers. A refreshing summer staple for any 90s kid. A thread of nostalgia wove its way through the show. No doubt a result of two years spent longing for the energy of a crowd, the community of live music. An emptiness felt by us all.

While the audience sat in a quiet, bated breath level of reverence during her set, the entire room erupted with a roar of applause and a standing ovation as Olsen exited the stage. Both, a rarity for opening performances. Though the greatest talents in the world have graced The Ryman stage, I can’t remember a time where I’ve experienced three such earth shattering vocal talents on the same night. And while Olsen and Baker have historically kept their live performances to the bare essentials, both opted for full backing bands on this tour, which added incredible depth to their sets, and allowed them space to shine brighter than I’ve ever seen.

Though Angel and Sharon chose to tell stories and joke with the audience between songs, Julien kept her head down and the intensity raised throughout her set. For any attendees unfamiliar with her work, the sweet, quiet voice that rang out through the auditorium when she stepped up to introduce herself with a simple “Hi, I’m Julien,”  would later throw them for a loop. The sheer power of her vocals, and confidence on stage, have grown immensely since her early days of playing Music City. Baker still delivers lyrics that simultaneously haunt and heal, with a voice that gives you chills at its lowest or highest volume, but her backing band added a powerful force that perfectly filled out her live performance. While seeing her with just a guitar and loop pedal is no less astounding, the layered rock instrumentals weaved into the show felt reminiscent of bands like Joyce Maynor and Sunny Day Real, and gave an unexpected punch of energy to the night.  Having played the historic venue multiple times before, there was an apparent level of comfort that can only come from experience. Being at home on such a legendary stage, so early in their career is only fitting for a once in a lifetime artist like her.

With hometown friends and family in attendance, I noticed Julien sneak out of a side door to greet a small group of waiting loved ones between sets. With the biggest smiles and tightest embraces, it felt like she was seeing them for the first time in a long time. Maybe even since the pandemic began.

When it came time for Sharon Van Etten to take the stage, the eruption from the crowd was a reminder of her status as a true living legend. The intensity embodied in her stage presence stands in contrast to the quiet sadness and longing her lyrics often portray. Giving the impression that even though she may have been broken when a song was written, she doesn’t stay down for long. Opening her set with “Headspace,” a distortion heavy ballad from her new record We’ve Been Going About This All Wrong, Van Etten pulled the audience in as the stage lights cast a shadowy darkness across her face, made all the more haunting with beams of red that matched her lips. Intentionally or not, channeling the dark, romantic essence of Robert Smith.

Unlike the moodiness of her performances, between songs she seemed light-hearted and comfortable, as though she could be hanging in a friend’s backyard, joking early on that she was about to piss her pants, but had “never pissed in leather before.” Being on The Ryman stage clearly brought memories flooding back, as Van Etten shared the story of meeting her now husband and co-parent, while on the road with Nick Cave back in 2013 (this being her first time on the legendary stage since). Returning to tour life, after two years of unexpected twists and turns (one of those twists, a move to LA only months before Covid hit) seemed like a gift she was taking each moment to savor. Bidding the audience to dance poorly along with her, she ended her set with an unexpected jubilance from a known purveyor of sad songs. While her new record paints pictures of uncertainty and the feelings of helplessness one has while watching the world burn (literally in her case, with the wildfires nearby her Los Angeles home in 2020), the smile on her face throughout the night gave no doubt that her spirits are high and her return to performing has been long anticipated.

Wrapping up an electrifying set, Sharon’s pretend waves of goodbye to the audience prompted a classic, floor stomping, pew thumping cry for an encore that fans and musicians alike have come to expect at The Ryman. The singer quickly returned to a crowd who lost only a handful to the “lets beat the traffic” folks. Angel Olsen, tambourine in tow, joined Van Etten onstage for a rendition of their song “Like I Used To” and the love between the two artists shone with a warmth that was echoed by the golden lights that swept around them. With one more trip down memory lane, Sharon told a story of the time they met while crossing paths on tour. Running into each other in a cafe, she recalled Olsen “pushing the tables together” so they could chat, and how that act of open-hearted kindness says so much about the person Angel is. “That’s me, always pushing the tables together,” Olsen joked with a laugh from the audience. Ending the night with a gorgeous cover of Harry Nilsson’s 1971 ballad “Without You,” the audience was sent home with a parting gift of yet another heartbreaking serenade. Sadly, Julien didn’t join them for a song during the encore, but if it meant she got to spend a little more time with friends and family, all for the better.

Nights like this are undeniably special, even in a city where those moments aren’t in short supply. Seeing any artist at The Ryman always feels like a gift, but this one felt like it was picked out especially for me. I have a feeling everyone in the room that night felt the same way. Thank you Julien, Angel, and Sharon for an unforgettable night!