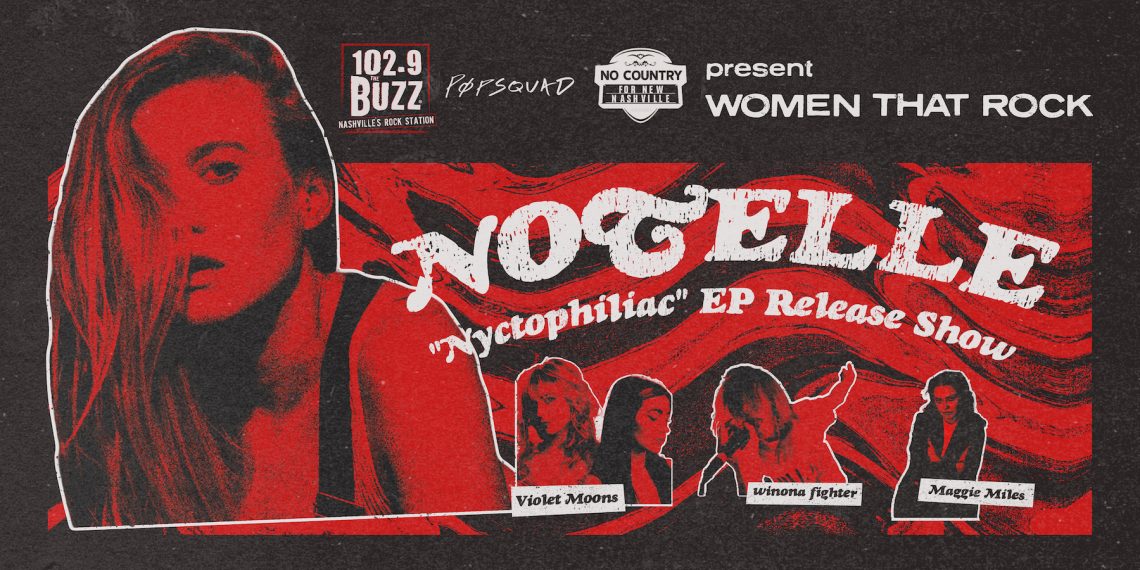 A favorite of ours for years now, local “nightmare pop” artist Notelle is preparing to drop her debut EP, Nyctophiliac, and will celebrate with a release show May 12 at The High Watt, co-presented by us, along with 102.9 The Buzz and Popsquad. Dubbed the “Women That Rock” showcase, the rest of the lineup features some other fantastic up-and-coming local talent as well: indie-psych duo Violet Moons, alt-pop singer Maggie Miles, and punk artist Winona Fighter! Notably, this is one of the very last High Watt shows planned before the building changes hands under less-than-amicable circumstances, so we really, really encourage you to come out and celebrate some of the city’s coolest independent talent in one of the best independent spaces while you still can.

Tickets to the show right here, but we’re excited to announce that we’re also giving away a pair of tickets to one lucky winner! Enter below, and scroll for a preview of the incredibly stacked lineup.

Self-described as “dark industrial nightmare pop,” artist, producer, and songwriter Notelle has made a name for herself in recent years both as a solo artist and an in-demand collaborator with producers and DJs across the globe. We’ve sung her praises time and time again, and can’t get enough of the buzzy local singer’s dark, electro-infused, brooding, edgy, and extremely catchy musical sensibilities, and vulnerable and sometimes macabre thematic focus. Her singles have been dominating our playlist for years now, and debut EP Nyctophiliac feels like a long time coming!

Psych-tinged indie duo Violet Moons formed during the first year of the pandemic, and released their only two singles so far, “Hex a Man” and “Witchhunt” last year. Still, the pair, Aubree Riley and Kierra Bronson, have fast become a live fixture in indie clubs and DIY spaces around town, and their dreamy, lush, dark, and harmonically dense sound has us excited to hear what’s next!

Alt pop breakout Maggie Miles has been a favorite of ours since her stellar debut album, Am I Drowning or Am I Just Learning How to Swim, arrived in 2020, emotionally resonating with her earnest, homegrown style of bedroom pop. Miles has been busy on the local show circuit lately, and her recent single “Asthma” has us eagerly awaiting her sophomore LP!

Formerly known as Coco Kinnon or Coco K., Winona Fighter cut her teeth in the Boston punk scene, and retains that hard-hitting yet accessible punk sensibility in her grungy, pop-infused alt-rock sound. The Winona Fighter moniker is new, so look out for a debut EP from this project soon!