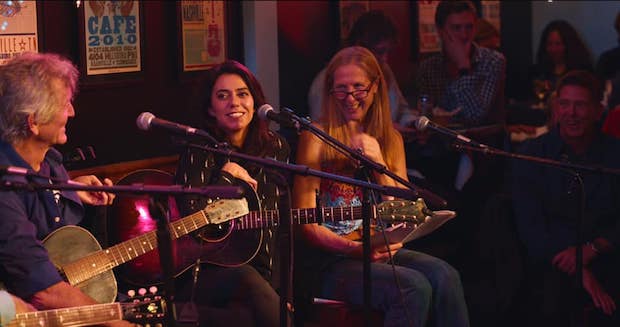 It’s not often we get to talk about feature films on this site (despite being a passion of this particular writer), and even more seldom that said features are helmed by musicians we’ve covered in the past, or produced by award-winning, primarily music-focused, local entertainment companies. So when the opportunity arose to catch a screening of filmmaker and musical artist Haroula Rose‘s debut feature Once Upon a River at the Nashville Film Festival, and to attend a subsequent musical celebration at The Bluebird Cafe, we were thrilled to document an exciting and different side of Nashville’s flourishing creative community.

If the name Haroula Rose rings familiar, especially to music fans who frequent this site and the scene we cover, it’s likely for her impressive career as a singer-songwriter. Chicago born and now LA based, Rose has, for over a decade, been drawing acclaim (and landing a variety of TV and film placements) for her immensely story-driven, sharp, and thoughtful indie folk and Americana work. With two full-lengths, two EPs, tours around the globe, and a host of critical praise, if Haroula’s career began and ended at her talents as a musician, that alone would be a commendable and enviable accomplishment for any artist. But, like many creatives who find their work and narrative expression spanning a variety of artistic mediums, Rose’s command of storytelling and tapping into the emotional core of the human condition translates seamlessly into her other lifelong creative passion: filmmaking. 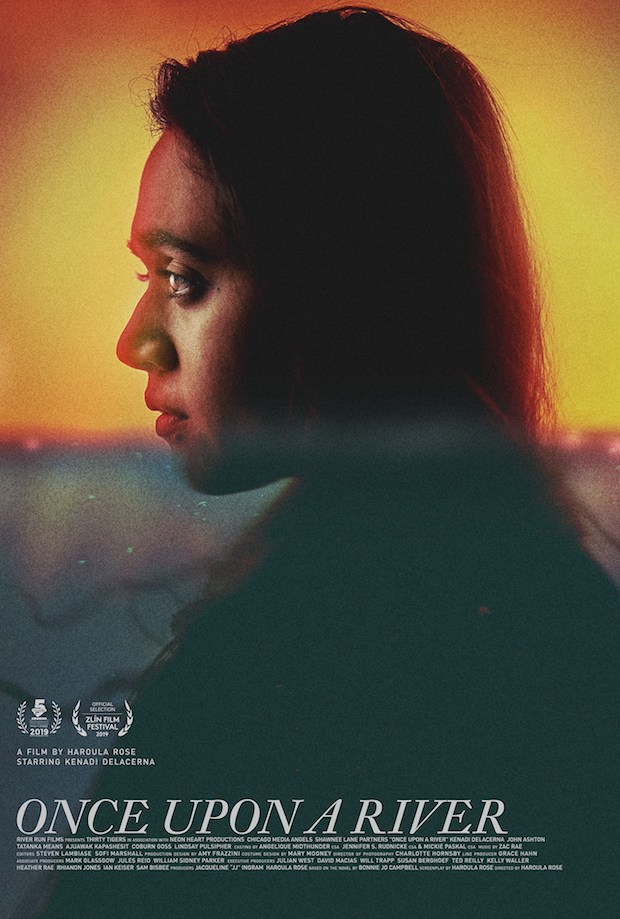 Haroula Rose’s debut feature, ‘Once Upon a River,’ is currently touring more than 30 film festivals worldwide.

Hardly a newcomer to film, Haroula Rose has, for as long as she’s been making music, also been honing her talents behind the camera, directing short films, music videos, and even a pilot, as well as serving as a producer, music supervisor, and actor for a variety of projects. A serendipitous friendship with another burgeoning filmmaker, Ryan Coogler, who she met during her brief time at USC’s film school, would lead to Rose’s most high-profile early credit, as an associate producer on his breakout feature debut Fruitvale Station (which subsequently found Coogler helming Creed and Black Panther, catapulting him to superstardom), and would also prove the catalyst for acclaimed, Nashville based entertainment company Thirty Tigers (with whom Haroula had forged a successful partnership through her music) to enter the film market, after Rose approached co-founder David Macias, an avid film fan, about investing in Fruitvale. In the several years since that film’s success, Thirty Tigers have continued to maintain a modest footprint in the indie film sphere, and were instrumental in helping Haroula bring to fruition her debut feature film, Once Upon a River.

Based on the 2011 novel of the same by author Bonnie Jo Campbell, Once Upon a River is the story of a part-Native American teenage girl, Margo Crane, forced to travel alone along a river in rural 1970s Michigan in search of her estranged mother, after her life is upended by the sudden and tragic death of her father. A tale of survival, perseverance, individualism, found family, and identity, the novel’s cinematic quality immediately captivated Rose, who discovered it by chance from a blurb in her college alumni magazine (both women attended the University of Chicago). Even before making the film, the novel’s effects could be felt on Haroula’s creative output, providing inspiration for the track “Margo” on her most recent LP, 2016’s Here the Blue River (the album title is a reference to Ralph Waldo Emerson poem). And after getting the ball rolling with Thirty Tigers’ involvement, taking her own journey to the river to meet with Campbell and secure the book rights, and adapting the screenplay herself, Rose largely shot the film in rural Illinois, not far from native Chicago, in late 2017.

After officially making its world premiere at the Bentonville Film Festival in Arkansas earlier this year, Once Upon a River has been touring the nation (and has now made its way to Europe), bowing at a variety of independent fests, met with critical acclaim and receiving numerous festival awards (Best Narrative Feature and Best Female Actor at Gallup, Best Narrative Feature and Special Jury Award at MINT, and Best Director at BendFilm,  among them) and nominations along the way. Fittingly, the Nashville Film Festival, which celebrated 50th anniversary from Oct. 3-12 at the Regal Hollywood 27, screened the feature twice last week, and I had the pleasure of attending the second and final local viewing on Friday night.

Anchored by a magnetic and vulnerable lead performance from newcomer Kenadi DelaCerna as Margo, Once Upon a River is a stunning and confident first feature from a filmmaker with an expert knack for storytelling. Admittedly, I haven’t read Bonnie Jo Campbell’s novel (though after viewing the film, I promptly added it to my library queue), but each character felt so fully realized and grounded, reflective and self-aware and flawed, behaving as real people do and not simply as plot devices (a pit many first-time features fall into). Haroula’s (and, I’m sure, Bonnie’s) knack for dialogue, for character growth, for exploration of purpose, for capturing the feeling of entering adulthood, landed with raw, real-life earnestness, and though at no point did I have a hard time believing the film took place in the late ’70s, its sense of anywhere, anytime rural Americana could just as easily have been set today. As a film the general public currently can’t easily view, I’m hesitant to delve into many specific plot details, but as a sort of mashup of a road movie and a wilderness journey film with a strong and self-sufficient young female protagonist (I definitely got echos of Into the Wild, Winter’s Bone, and even more recent works like Grandma, Leave No Trace and this year’s The Peanut Butter Falcon), it should come as no surprise that Margo encounters some colorful characters along her path. The most prominent, a disenchanted elderly man named Smoke, is played pitch-perfectly and curmudgeonly yet charismatically by veteran actor John Ashton, whose bond with Margo becomes central to both characters’ growth and journey. Captivating, intimate, feminist, and heartfelt, Once Upon the River feels like a labor of love for everyone involved; an impressive and fully-realized film and the start of what I’m sure will be an exciting and impactful career from Haroula Rose. Currently only on the festival circuit, I’m not sure when exactly Once Upon a River will be widely available to the viewing public, but I urge any fan of thoughtful and reflective indie filmmaking to see it as soon as you’re able (and, in the meantime, pick up the novel). 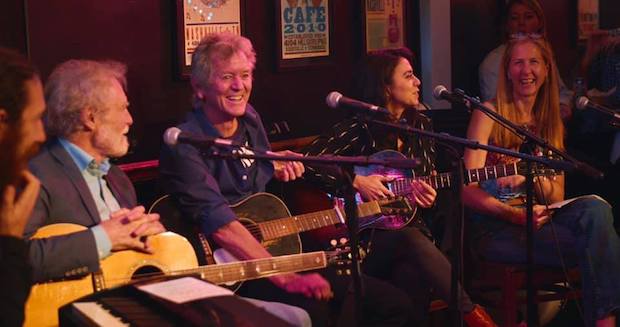 Apart from the Thirty Tigers connection and Haroula’s musical history, Once Upon a River bears even more ties to Nashville, with acclaimed local country and Americana artists JD Souther (who nearly wound up playing the role of Smoke) and Rodney Crowell having contributed to the film’s soundtrack. Following Friday’s festival screening, the two men joined Rose and Bonnie Jo Campbell for a very special, intimate in the round style performance at The Bluebird Cafe, with the film’s composer and Rose’s longtime producer and collaborator Zac Rae (a lauded multi-instrumentalist and in-demand LA session player, who’s also now a member of Death Cab for Cutie) also on hand for accompaniment. Though not strictly Once Upon a River focused, the show certainly captured the emotional resonance and soul searching spirit of the book and film, with each fantastic artist trading stories and picking songs off the cuff, creating a sort of intimate, informal feeling of an uninhibited jam session between old friends. Campbell’s inclusion felt particularly special, as, in lieu of playing songs, she shared passages from the novel, as well as stories about its journey to the screen (notable anecdotes like her insistence that Haroula learn to shoot guns before making the film were met with an especially fun response). The couple of hours of back and forth seemed to fly by, and by the end came a particularly special moment as Haroula played “Rachel’s Song,” an original she penned specifically for the film with Rae and Nashville singer-songwriter Peter Bradley Adams (who also joined in for the performance), concluding one of the most unique and personal post-film events I’ve ever attended. Not simply a singer-songwriter who dabbles in film or a filmmaker who has a knack for music, but an unbelievably gifted creative mind and storyteller able to translate her art with clarity, thoughtfulness, and technical expertise across both mediums, getting to watch Haroula Rose showcase her art in two such complimentary and impactful ways in one evening was a thrilling and wonderful experience, and left me feeling like I’d had the privilege of witnessing two important halves of one immensely creative whole.

“Margo,” from Rose’s 2016 LP ‘Here the Blue River,’ was inspired by the book’s protagonist.

Haroula Rose is currently working on a documentary, and already has plans for a second feature. For now, you can only see Once Upon a River if you happen to have access to one of the numerous film festivals where it’s screening, but I have no doubt that an eventual distribution deal will someday bring it to a streaming service (or, ideally, a theater) near you!