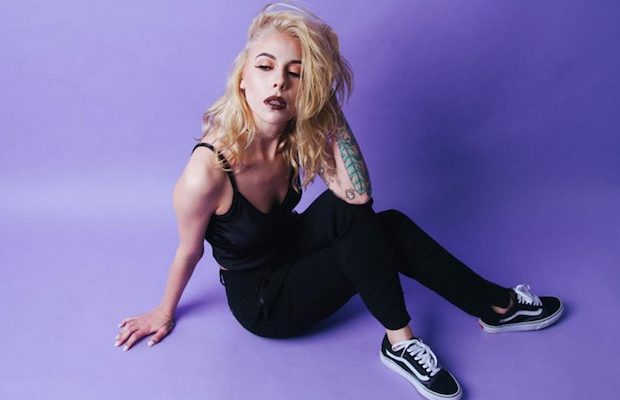 Born in Oakland adjacent Albany, California, Jordan Capozzi, better known by her stage name Lil Debbie, met Natassia Zolot, a.k.a. Kreayshawn, and Vanessa Reece, a.k.a. V-Nasty, as a teen, later forming Bay Area hip hop group The White Girl Mob around a decade ago, in which Debbie primarily served as DJ. Heavily influenced by Oakland’s Hyphy hip hop scene in the early ’00s, and name-checking rappers like J.Stalin, Husalah, The Jacka, Too Short, and E-40 as early influences, Capozzi, whose father and mother worked in music and fashion, respectively, developed a deep understanding and strong love for underground, west coast hip hop and hip hop culture in her formative years, and along with her White Girl Mob cohorts, honed an early knack and local reputation for throwing buzzy parties, documented through self-produced creative video spots, achieving viral fame and ultimately leading to Kreayshawn’s solo career exploding after 2011 breakout hit “Gucci Gucci” (which boasted a video that prominently featured Debbie).

Not long after they became nationally known, Lil Debbie was booted from The White Girl Mob in late 2011, but used the groundwork of her early buzz to transition into a solo career as a rapper, after briefly attending school for fashion (fashion and modeling have also been part of Capozzi’s creative repertoire). Early cuts with former bandmate V-Nasty and breakout rapper Riff Raff helped attract notice for Debbie’s skills as an MC, and a series of early mixtapes, EPs, and features made her an underground sensation. Taking note of the major label growing pains experienced by some of her peers (as well as the burgeoning culture of SoundCloud rap), Lil Debbie has long opted to operate independently, retaining strong control of her own sound and image, and relaying on the internet, regular video releases, and her social media presence to hype her edgy, sex-positive, stoner-friendly, Bay Area inspired works. After an entrepreneurial turn in launching her own weed strain, edibles, and pot products, the rapper dropped her proper debut LP, Debbie, in 2016, and followed it with OG in My System, and In My Own Lane, in the subsequent years, each honing her sound and asserting the MC as much more than an internet fad. Debbie’s most recent EP, Bay Chronicles, is an another strong release, and though her set time is late and far removed from Centeroo, if you’re looking for some cool, underground hip hop off the beaten path, Lil Debbie’s set could low-key be one of the best weekend finds.