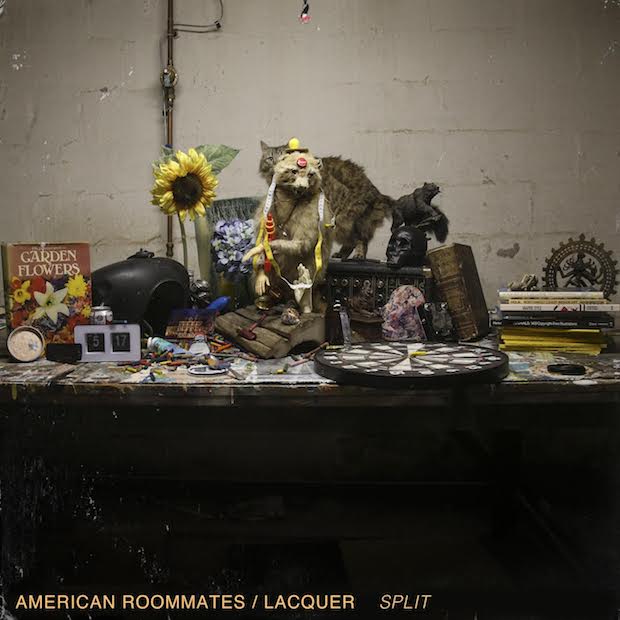 Two of our favorite rising acts in the local underground scene, genre-bending indie rockers American Roommates and hard-hitting alt rockers Lacquer, are teaming up for a brand new Split EP, which officially arrives tomorrow, May 17, with a show at The East Room planned in celebration (along with Vid Nelson and featuring a digital light show by Blair White – details here). Before physical copies of the record arrive, however, and before its official digital release, we’re thrilled to bring you an early premiere of Split in full! Hear it right now below.

For the first two songs on the split, a pair of brand new singles, American Roommates offer their signature layered, experimental, and rhythmic indie rock sensibilities with a propulsive and hypotonic track, “Safer By Myself.” Lacquer, in turn, provide a fuzzier, more hard-hitting counter with darker, grungy jam “Dragging a Train.” Then, for the final two songs, the bands covered each other’s title tracks from their respective 2018 releases, with Lacquer putting their own hard-hitting flair on American Roommates’ “Am I An Adult Yet?,” and American Roommates offering a deconstructed, trance-like take on Lacquer’s “Good Gracious Alive,” both to phenomenal results.

“It was a fun challenge learning our friends’ songs,” American Roomates’ Will Bishop tells us, “We had to stay respectful of the material while making creative decisions to differentiate ourselves. Lacquer took a fun, loud song and turned it up while stretching its darkness out. American Roommates took a heavy, heartful, guitar-laden track and tried to keep the same reverence but do it without guitars at all.”

Partially recorded at the home of All Them Witches’ Ben Mcleod, as well as the house where American Roommates all reside (save for AR bassist John Fentress’ parts, which he tracked while living in Vietnam), the EP was mixed by Mcleod and mastered by Mikey Allred, and features the addition of new American Roommates drummer Spencer Mccalley. It’ll be available on special tapes and lathe cuts for its physical release, which you should definitely grab, if, for nothing else, to check out the super cool album art (see it above), which features a collage of items owned by almost every member in both American Roommates and Lacquer.

Originally from Columbus, GA, American Roommates relocated to Nashville a few years back, and have since fully integrated into the local DIY scene, performing at clubs and alternative spaces all over town at an increasingly frequent clip. The band’s 2015 EP Tomahawk served as an admirable introduction, but as they’ve steadily become an exciting and buzzy fixture in the local indie scene, further cementing their sound while solidifying their permeant lineup, and really coming into their own with last year’s Am I Am Adult Yet?, positioning them as one of the most exciting and essential indie acts in town. Lacquer, meanwhile, have increasingly been catching our eye as a regular fixture on great local bills, forging their signature blend of fuzzy alt rock, indie, hard rock, and grunge, first with an eponymous EP in 2017, then with last year’s full-length Good Gracious Alive.

Both groups are a true gem in the Nashville indie landscape, and we strongly urge you to give them a spin if you haven’t already, then go see them to live to support their new split! Stream it in full right now.