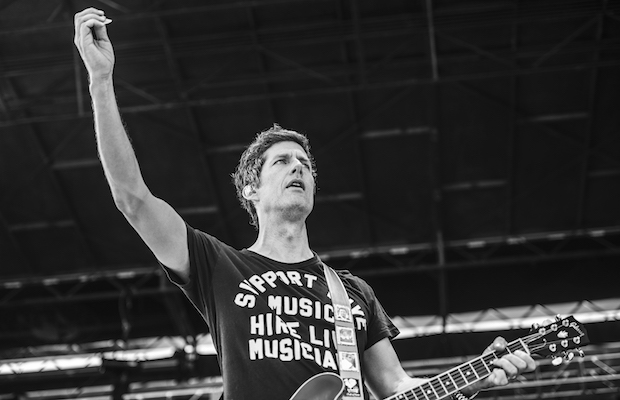 It was only a few years ago that Better Than Ezra frontman and accomplished songwriter and producer Kevin Griffin was out for a jog near his home in Franklin (having recently relocated from Los Angeles, and, before that, his native New Orleans), when he gazed upon the picturesque and sprawling Park at Harlinsdale Farm, a green space anyone who’s ever frequented The Factory shopping center across the street has surely driven by countless times, but perhaps never given a second thought to. Having long dreamed of founding his own music festival, in the mold of the New Orleans Jazz Fest he’d attended and performed for many years back home, Griffin had an a-ha moment: this was the place.

Along with his co-founders and longtime friends Michael Whelan and Brandt Wood, Kevin set out to create what would become Franklin’s Pilgrimage Festival, launching in the summer of 2015 to positive reviews and immediate success, a boutique and community-rooted event with an emphasis on all ages fun, a rootsy and well-curated mix of local and national talent, and a particularly well thought out slate of non-music offerings and activities. Not competing- at least not yet- with mega events like Bonnaroo, Pilgrimage has, for three years, benefitted from feeling like the perfect size and scale for the Nashville (and particularly Franklin) area, managing to grow, evolve, and improve each season.

We first caught up with co-founder Kevin Griffin in the summer of 2015, for a lengthy chat ahead of the inaugural Pilgrimage, as part of our former podcast series (it’s still a fascinating listen if you’re curious what goes into creating a major music festival from scratch). At the time, he was humble yet optimistic, still learning along the way, but confident in the great team he’d assembled to help plan and execute an event of this scale. He told us about building meaningful and long-lasting relationships with the community, knowing when to check your ego and delegate work and responsibility, and never taking for granted a festival’s success or future, sharing that a mantra in the festival world is that “if you make it to year three, you’ve got something.”

It seems fitting, then, that after three successful years and as we head into a fourth, set to take place this weekend, Sept. 22 and 23, with performers like Jack White, Chris Stapleton, and Lionel Richie, we were able to check back in with Kevin Griffin for another chat, to discuss what he’s learned along the way, the challenges and surprises that come with managing an event of this scale, living up to expectations and learning to adapt, balancing his creative and work life, and what to expect for Pilgrimage this year and going forward. Look for our full lineup guides throughout this week, find out more about Pilgrimage on the event’s site, and read our full interview with Kevin Griffin below! 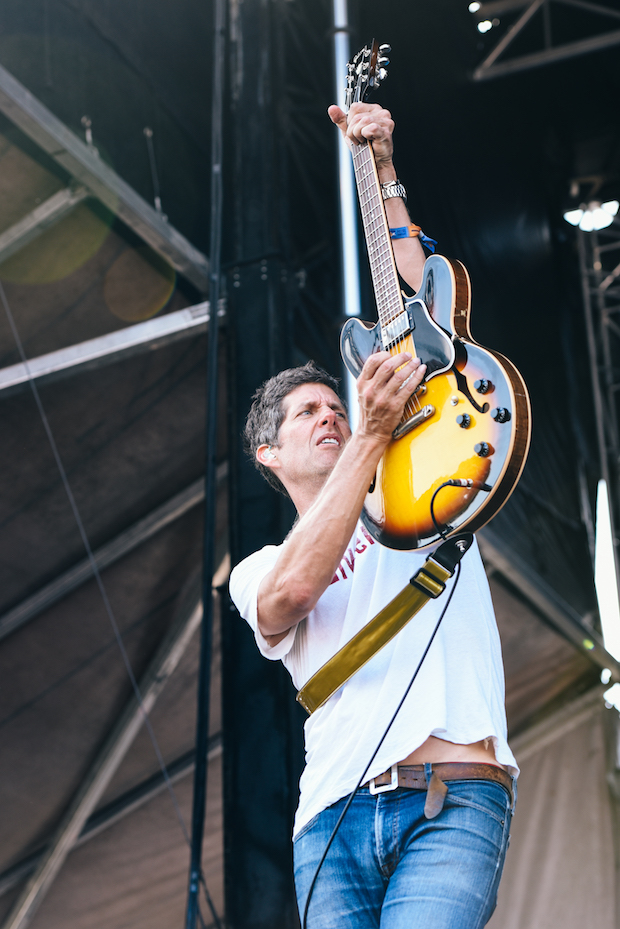 Though Pilgrimage is right around the corner, Kevin Griffin doesn’t sound stressed. In his typical, laid back demeanor, he seems level-headed and prepared for the event’s latest iteration, a pretty high-profile year following a 2017 headlining turn from local transplant turned festival partner and producer Justin Timberlake- a big get for any fest, but especially one of this size, which helped double Pilgrimage’s turnout in a single summer. I remind Kevin of our chat three years again, and the now timely anecdote he told me about year three being the magic number.

“It’s exactly like people told us. You make it to year three, and you’re good.”

“To be talking to you again, about to do our fourth festival, it’s humbling,” Griffin tells me, “It’s exactly like people told us. You make it to year three, and you’re good. Years one and two were building years. They were harrowing years in that you’re losing your ass. You’ve got to over-deliver, over-produce. You realize word of mouth is your biggest currency. People have to tell their friends and they tell their friends and hopefully you build to a critical mass by year three. We had that amazing stroke of good fortune, meeting JT’s people and having him come on board, then selling out. To be sitting here at year four, it’s complete gratitude, I can’t believe we’re here talking, we’ve had three years, about to do this fourth year, and we’re already booking year five. That’s amazing, but at the same time, there are always new challenges. You have a year like last year, and it’s like ‘how do we beat it?'”

I ask him if living up to last year feel like a lot of pressure. He thinks it’s mostly self-imposed, but tells me they refer to those expectations as “the JT effect,” acknowledging “there aren’t a lot of stars out there like Justin Timberlake. He doesn’t play festivals, and that was before the new album came out so there was so much anticipation and desire to see him. It was a special once in a life time moment.” Still, with resident rock star Jack White and country breakout Chris Stapleton topping the lineup this year, along with big names like Lionel Richie, Dave Matthews and Tim Reynolds, Hozier, Brandi Carlile, Dawes, and Bleachers, it feels like they made a concentrated effort to really beef up the bill, adding an additional small stage, expanding kids stage offerings, bringing a rich lineup to the Americana Music Triangle (an immersive, educational new addition from last year), and increasing the VIP offerings, making for the biggest and busiest Pilgrimage schedule yet.

“We think our GA experience is as good as a lot of festival’s VIP.”

Each year, particularly 2017, Pilgrimage has seen a lot of growth and change, and this year is no different. The most visible new addition is Millville, formerly a lounge area turned into a cool little enclave with music and a market. As Griffin explains, “Millville is the childhood neighborhood home of JT, a suburb of Memphis. Last year we called this area near the entrance Millville, and just had a miniature village of homes. It was just a lounge area. This year it has a small stage, which we’re calling the Kimbro’s Pickin’ Parlor because Will from Kimbro’s is curating it, and there’s food and beverage there. It’s a legit hang area now, arguably one of the prettiest areas of the festival.”

Also expanded this year are the VIP options and amenities, with special music and local chefs providing food and beverage, and a new premium, exclusive, and pricey V-VIP level in partnership with Blackberry Farm, dubbed the Grand Champion Experience. As Kevin is quick to point out, however, general admission at Pilgrimage is a pretty great (and reasonably priced) experience in its own right, proclaiming “We think our GA experience is as good as a lot of festival’s VIP, just in the lounging areas, the shade, the food, the creature comforts; we’re proud of that. There’s something new every year, and this year is no exception.”

Along with learning and growing, Pilgrimage seems to find its identity a bit more each year, sharing a kindred spirit to the feel and mission of Jazz Fest, while also exploring the strengths and unique aspects that set it apart. “Our whole goal and our challenge has been, let’s do a festival a lot like Jazz Fest that’s just fearless musically, that has breaking new challenging bands with headlining favorites, and that’s also family friendly,” Kevin tells me, adding that he wanted to create something that music patrons with good taste and a desire to go to festivals, but might have kids or be at a point in their life when they can’t make a commitment like Bonnaroo or Lollapalooza, could attend, with early start and ending times and easy, in-town accessibility.

“Authenticity has been our word. Whatever it is, it has to be good.”

In the few short summers since Pilgrimage launched, similarly aged events have already folded, a few bigger festivals have faltered, and, of course, there have been a some famous misfires like Fyre Festival. When I ask Kevin why he thinks Pilgrimage has worked so well, he chalks it up to authenticity and having trust in his team. “Authenticity has been our word,” he explains, “Musically, is it just fucking good? Is it pop? Is it alt country, r&b, or bluegrass? Whatever it is, it has to be good. It has to be that way with the food, the alcohol, the layout, the merchants, the kids area. It’s a high bar, but people respond to it. Even the most cursory attendee, they seem to feel it. I’ve learned that with writing music, that people have this sixth sense and can tell if something is sincere and authentic. When you’re making something, you have to believe that.”

While the festival hasn’t had any major mishaps (a bit of traffic congestion the first night last year is Griffin’s most critical concession), Pilgrimage has been more than willing to learn and grow, and, from the start, Kevin has been determined to check his ego, hire a great team, and maintain trust in delegating responsibility, all the while learning more and more about the moving parts and huge amount of work that planning and executing a festival entails. “I’m a music fan first, all of us are, the partners, and we want this to get better every year,” Griffin explains, “We take everything- the props and critiques- to heart, and learn from them.” Kevin is also performing solo this year, a Pilgrimage first, backed by a full band in support of album he’ll release in 2019. While it seems like balancing a full-time music career with running a festival would be daunting for most, the fact that Griffin doesn’t need to micromanage further affirms the talent of his team. “I learned early on that you come up with a great idea and vision with partners, then surround yourself with talented people,” he affirms.

Though year four is certainly an important and transitional one for Pilgrimage, it no longer feels like uncharted territory, as it’s safe to say it’s certain to be the well-organized, well-respected festival we’ve come to expect at this point- familiar and comfortable, with tweaks and new offerings based on attentiveness and feedback. And while Kevin rattled off names of acts he couldn’t wait to see- still clearly a true fan- he also shared a few wish list bands he’d love to land in future years: Spoon, Ed Sheeran, The Head and the Heart, The Flaming Lips, Mumford and Sons, Florence + The Machine, and Franklin’s own Paramore. A year five is already a given, and Pilgrimage seems determined to plant its roots for many more, so it certainly feels safe to daydream. But, before you start thinking too hard about 2019, be sure to familiarize yourself with this year’s fantastic lineup, then make the Pilgrimage to Franklin this weekend for one of the best, most thoughtful, and well-curated festivals Middle Tennessee has to offer!

Pilgrimage Festival returns to the Park at Harlinsdale Farm in Franklin Sept. 22 and 23, 2018. The event is all ages, and both single day and weekend passes, with general admission and VIP levels, are available here.