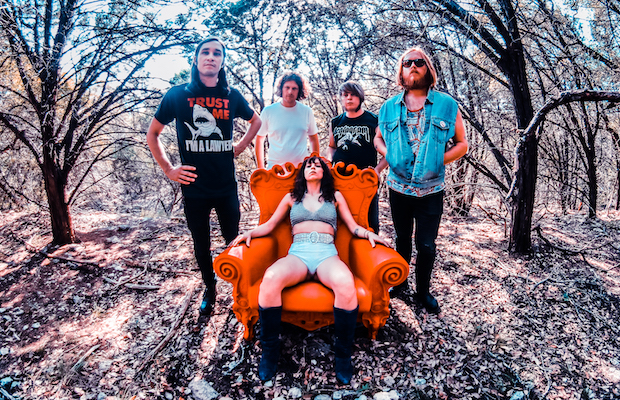 Formed a decade ago by singer Sabrina Ellis and singer/guitarist Andrew Cashen, friends from their native Houston, who reconvened and recruited bandmates in Austin, A Giant Dog gained an early reputation for their electrifying and unpredictable live shows and brash, punk-spirited, old rock swagger-infused sound. After a few years gaining momentum in the DIY, they caught the attention of Spoon’s Britt Daniel, who took them under his wing and on the road, eventually inking a deal with Merge ahead of 2016’s Pile.

With an expansive, dynamic, and unadulterated rock style, AGD pair just as well with the likes of Jack White as they do with punks like Against Me!, which makes Country Westerns, in turn, a nice compliment to them on this bill. Fronted by JP5 head honcho and Duke’s owner Joey Plunket, the band are relatively new, but have been popping up on punk-skewing bills over the last several months, with Brian Kotzur, Ritchie Kirkpatrick, and even sometimes Bully’s Reece Lazarus, rounding out the lineup. It’s a busy Thursday night of shows, but you can’t go wrong with this one.

A Giant Dog and Country Westerns will perform tonight, Aug. 16 at Third Man Records. The show is all ages, doors open at 7 p.m., and tickets are available for $7.