CHVRCHES to Play The Ryman Oct. 15 | Watch Their New Video for “Miracle” 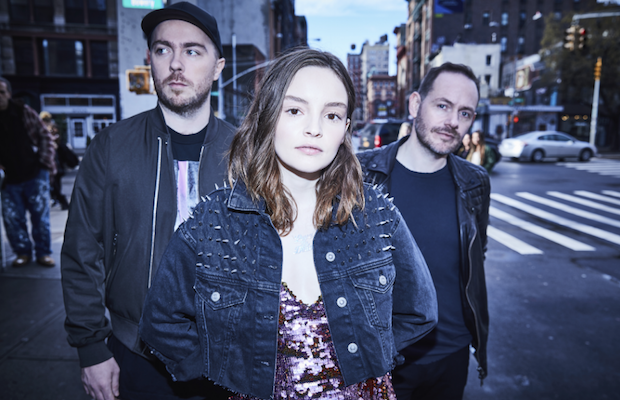 In support of each of their previous two albums, Scottish synthpop trio CHVRCHES have played Nashville, graduating from an electrifying debut at Exit/In in 2013 to a phenomenal 2015 stop at Marathon Music Works (which featured a very memorable guest appearance from Paramore’s Hayley Williams, sparking an entire reworking of one of their singles and an accompanying music video to boot).

It seems only fitting, then, that the group have upgraded spaces once more for their recently-announced Music City return, in support of highly-anticipated upcoming third LP Love Is Dead, due out May 25 on Glassnote. This time around, the band will play none other than The Ryman Auditorium on Oct. 15, a space that couldn’t be more perfectly-suited for their expansive, layered, and unabashedly poppy synth-drenched style, which, for the first time ever, will be recreated even more faithfully with the addition of a live drummer.

So far, in the run up to Love Is Dead, CHVRCHES have previewed a string of excellent singles, including “Get Out,” “Never Say Die,” and “My Enemy,” featuring a guest spot from The National’s Matt Berninger, all of which have us amped to hear the band’s latest release. Recent single “Miracle,” however, is the first new song so far to get the music video treatment, with a Warren Fu spot that arrived last week. Shot in one take, the video is a perfect compliment to the hypnotic, banger of a track, and exemplifies the band’s penchant for blending stylish, retro, dreamy sensibilities with substantive social commentary.

You can watch the new video below, pre-order the new record here, and grab tickets to CHVRCHES’ Ryman date now, ranging from $36-56 (with a portion of proceeds going to Southern Girls Rock Camp). Every time we’ve seen the band, both in town and at festivals, they’ve been nothing short of phenomenal, so it’s a safe bet this will be one of the best shows of the fall.