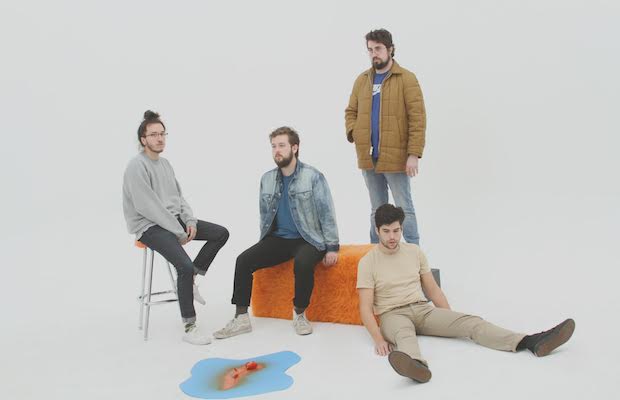 Originally from Columbus, GA, indie rockers American Roommates relocated to Nashville a few years back, and have since fully integrated into the local DIY scene, performing at clubs and alternative spaces all over town at an increasingly frequent clip. The band’s 2015 EP Tomahawk served as an admirable introduction, but as they’ve increasingly become an exciting and buzzy fixture in the local indie scene and further cemented their sound while solidifying their permeant lineup, we’ve been eagerly awaiting new tunes from the group’s current incarnation.

Dubbed Am I An Adult Yet?, American Roommates’ much-anticipated new EP will officially drop this Thursday, Feb. 22, but we’re very excited to bring you an exclusive early stream of the whole thing in full, which you can hear below right now!

Partially recorded at the Whites Creek house/studio where the group lives (they are actual roommates), the EP was produced by Will Bishop and recorded, mixed, and mastered by Jake Saghi. In addition to a digital release, it’s available for pre-order on a limited edition cassette tape, and marks the seventh release for burgeoning local boutique label The Haters Ball, run by American Roommates drummer Chase Loyd.

Lead single “Michael Jordan,” for which the band recently released a music video, gave us a taste of what to expect, and the rest of Am I An Adult Yet? delivers in spades, showcasing a layered, ambitious, experimental, hypnotic, impassioned, and dynamic style, which should immediately appeal to fans of similar high-art and genre-bending indie bands like Arcade Fire and Modest Mouse.

American Roommates are a true gem in the Nashville indie landscape, and a band that deserve so much more attention. If you’ve slept on them until now, their latest EP is a confident and commanding jumping off point, and you can celebrate its release live this Thursday, Feb. 22 at The East Room, while they’ll perform along H.A.R.D., The Deacons, and Quiet Oaks. The 18+ show is just $5, and proceeds go to benefit the Tennessee Immigrant & Refugee Rights Coalition, so you can support a great cause and great music at the same time! Find out more.

Moon Taxi Drop New Video for "Not Too Late"