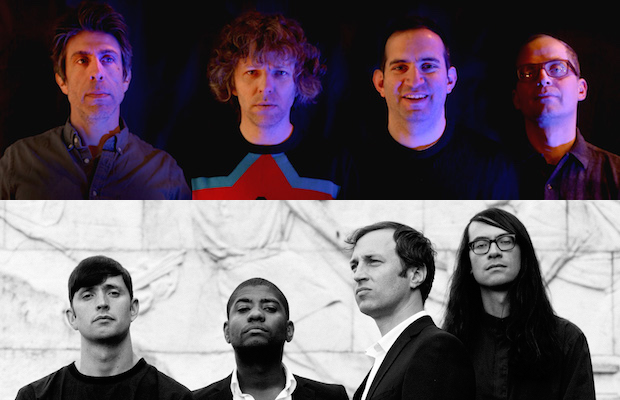 Longrunning New York dance punk stalwarts !!! and exciting, social and politically charged experimental rockers Algiers are bringing their co-headlining run to Mercy Lounge on Sept. 18, showcasing a mind-bending array of influences and smart, substantive, punk spirit, for a bit of an odd pairing that is, nonetheless, one of our most-anticipated shows to help kick off the fall. Whether you’re familiar with one or the other, or a fan of both acts, catching the interesting ways they overlap and complement each other is sure to be a memorable experience, and you can still grab tickets right here. We’re also excited to announce that we’re giving away a pair of tickets to one lucky fan, if you’d rather leave it to chance. Read on for more about the show, and enter below!

Formed over 20 years ago in Sacramento from the ashes of the Yah Mos, Black Liquorice, and Popesmashers, !!! (technically pronounced by repeating any monosyllabic word three times, but, for all intents and purposes, regularly pronounced and spelled out as “Chk Chk Chk”) have been a mainstay in the dance punk scene since their triumphant, self-titled debut in 2001. For over 15 years, the group, now based in New York, have toured the world, packing their early punk and post-hardcore edge into crafting their signature drawn-out, funky, venerable, and raw sound, enduring lineup changes and ebbs and flows in the musical climate (edgy dance punk definitely had a golden era in the early ’00s days of MySpace), always emerging with critical acclaim and a  cult following. Still going strong, !!! released their seventh album, Shake the Shudder, earlier this year, and with the sobering influence of the recent global and political climate, coupled with a distilled return to their edgy early days, it marks a perfect fusion between the band’s unpredictable energy and decades of polish. A group best experienced in concert, !!!’s return to Nashville is shaping up to be a highlight of the fall- don’t miss out!

Winner will be announced Friday, Sept. 15 at 12 p.m. CDT, and will receive one pair of tickets. Good luck!