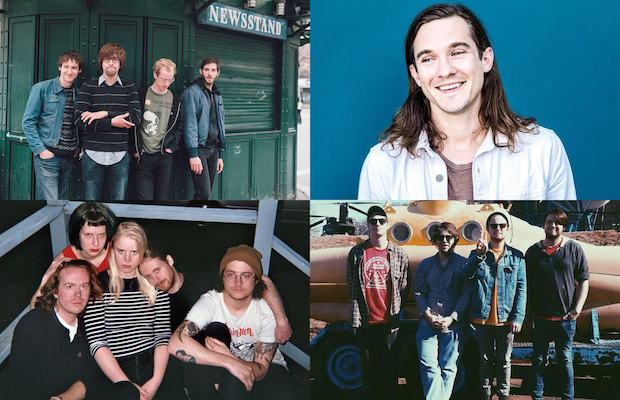 West Virginia’s Rozwell Kid have been a buzzworthy fixture in the underground pop punk, indie, and power pop scene for several years running. Boasting a sound reminiscent of early Weezer, but with a fuzzy, modern, and punk fueled twist, the group’s last full-length, Too Shabby, was one of the most criminally underrated records of 2014, and their 2015 followup EP, Good Graphics, dropped as part of local label Infinity Cat’s cassette series. Now on tastemaking label SideOneDummy, the band recently unveiled their highly-anticipated new LP, Precious Art, which channels their signature nostalgia meets earnest, anxiousness and over the top singalong, pop-ready hooks, with even more emotional nuance and cohesive sound.

After a number of supporting spots in recent years, the band return to Music City tonight, Aug. 10 for a performance at The End, along with a stacked out bill of Chris Farren, Great Grandpa, and Early Humans. Best known for fronting poppy, indie, emo rock group Fake Problems since 2005, as well as for his side project Antarctigo Vespucci with Jeff Rosenstock, sarcastically self-proclaimed punk celebrity Farren has flirted with solo music here and there in form of EPs and Christmas tunes, and finally dropped his first full-length, Can’t Die, last fall, unabashedly letting his pop tendencies fly, and juxtaposing upbeat, bright songs with deeply personal and sometimes dark lyrics.

Hailing from Seattle, grungy, poppy, indie rockers Great Grandpa released their debut LP, Plastic Cough, just last month, and this marks their first nationwide tour. With a sort of slacker, sludgy bent, they call back to the same affinity for ’90s riffs as Rozwell Kid, and their ability to channel youthful nostalgia makes them a buzzworthy rising act. Local act Early Humans are, similarly, a rising act to watch, and despite only having a few songs floating around, their fusion of indie rock, emo, and college rock is an intriguing, earnest mix. This is an excellent lineup from top to bottom, and you’d be crazy to miss it!