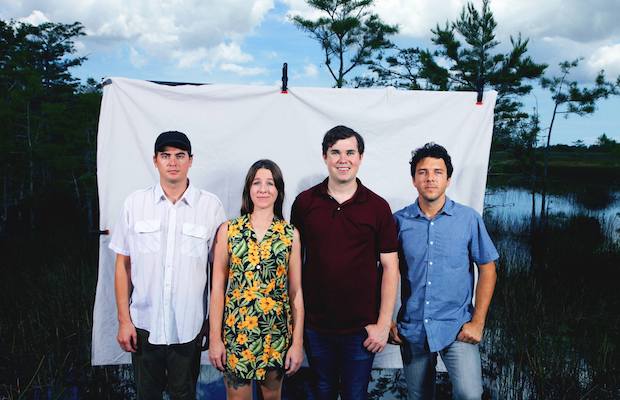 With new fourth album Snowdonia, Florida bred indie rockers Surfer Blood begin something of a new chapter. Now many years removed from the chillwave movement they helped popularize, and throughly settled into more indie, surf-tinged territory after flirting with electronic and garage rock elements over several releases, the band take on a more focused, and straightforward sonic direction, but that’s far from the only new beginning. Following the unfortunate death of guitarist Thomas Fekete, who quit shortly after the group’s last effort, 1000 Palms, to battle cancer, and after the exist of longtime bassist Kevin Williams, Surfer Blood are, in actuality, a wholly new band.

While Fekete’s death certainly affected the psyche of frontman John Paul Pitts, who largely steers the creative ship, the voice and personality of new members Lindsey Mills and Michael McCleary, joining drummer Tyler Schwarz, make an impact as well. Surfer Blood don’t reinvent the wheel with their new album, but they managed to perfect what they’ve been crafting for nearly a decade, and as a driving force, Pitts has never felt so confident.

In support of their latest, the group recently announced a run of summer tour dates, and we’re thrilled to see that they’ll return to town for the first time in two years June 23 at Exit/In, with support from Winter! A compelling live band, Surfer Blood are always a great time in concert, and with a new lineup and second wind, this feels like the best time to catch them in years! Grab tickets right here.