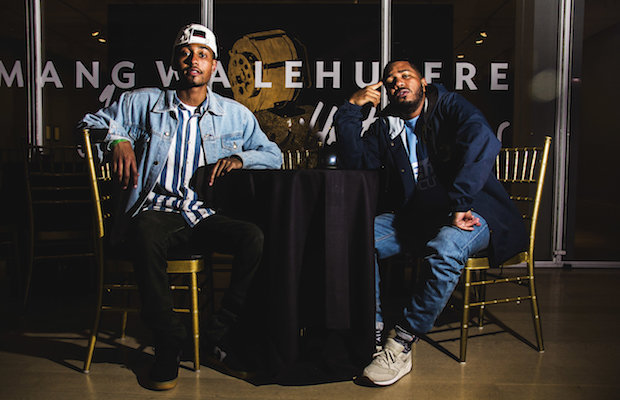 We can always count on Red Bull’s Sound Select concert series to curate some of the best local and national acts around, all for just $3. Tonight, Feb. 18 at The Basement East continues this trend, bringing together reunited Chicago hip hop duo The Cool Kids, buzzy up and coming southern rapper Pell, and Nashville’s own Jung Youth, plus DJ Owen Bones, for a stellar showcase at a steal of a price. As always, you need to RSVP to lock in your $3 admission, and show up early to guarantee entry (it’s first come, first served, and we have a feeling this one will fill up).

It’s been a decade since The Cool Kids erupted onto the scene, their contemporary meets old school, eclectic, expansive sound primed for the MySpace generation. After gaining fast and widespread buzz with their debut EP The Bake Sale, a slew of mixtapes, and their one and only studio LP, 2011’s When Fish Ride Bicycles, the duo of Chuck Inglish and Sir Michael Rocks abruptly called it quits in 2012, going on to pursue commendable solo careers. Despite shooting down persistent rumors of a reunion over the years, the group finally made amends, and staged a surprise return last summer, which has, so, far produced a few singles as they prep their long-awaited new album. One of the most interesting hip hop acts of the last decade, and one whose run was undoubtedly cut short, we’re beyond thrilled to have The Cool Kids back in action.

A buzzworthy fixture in the new guard, Pell’s career began after being displaced from New Orleans by Hurricane Katrina to Jackson, Miss. Since his 2014 debut mixtape, Floating While Dreaming, and LIMBO EP the following year, the rising MC has appeared at numerous festivals, drummed up critical buzz, and collaborated with big names like G-Easy. Likewise, Nashville local Jung Youth, who we’ve written about on numerous occasions over the years, has amassed a growing buzz with his genre-bending, electro-infused, lyrically sharp and fresh rhymes, and honed live show. This lineup is phenomenal for fans of contemporary hip hop, and at just $1 a performer, it might be the weekend’s most essential show.