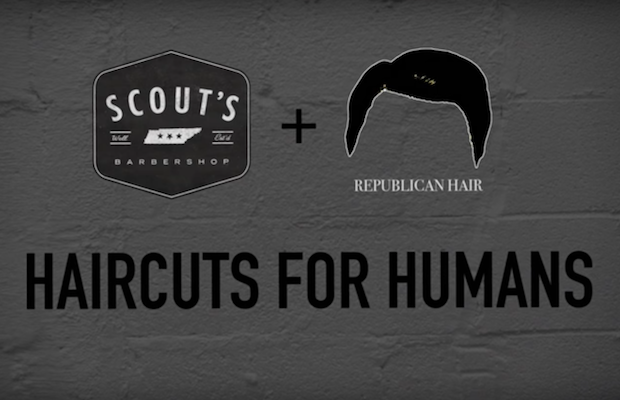 We’ve been reporting about the holiday spirit around town of late, from helping a Nashville institution to turkey drives for the homeless, and now we can report the good work of local artists Republican Hair and trendy Scout’s Barbershop.  Republican Hair mastermind  Luke Dick and Scout’s owner Brooke Allison teamed up earlier this fall to give back to the Nashville homeless by offering “Haircuts For Humans.”  It’s a pretty simple idea, really.  The pair loaded up a barber chair and the necessary styling tools in Allison’s old Chevy pickup truck, and set out to find folks in need.  The video below shows the results, and the smiles of the folks they found that day.

The two are continuing this magical gesture, and they are asking you to help.  You can offer up donations for Nashville’s Martha O’Bryan Center, or you can purchase a Republican Hair T-Shirt, which features the band’s logo of a conservative coiffure symbolic of many of the Republican politicans in U.S. history.  The best place to do the latter happens tonight (Nov. 21) at The Basement where Republican Hair will perform with Voodoo Revival at 7 p.m.  Head here to snag your $5 tickets for the show, but if you can’t make it out tonight, you can still score the shirt at this link.  Scout’s, Hot Yoga of East Nashville, and Edley’s are also all accepting non-perishable donations at their storefront locations.